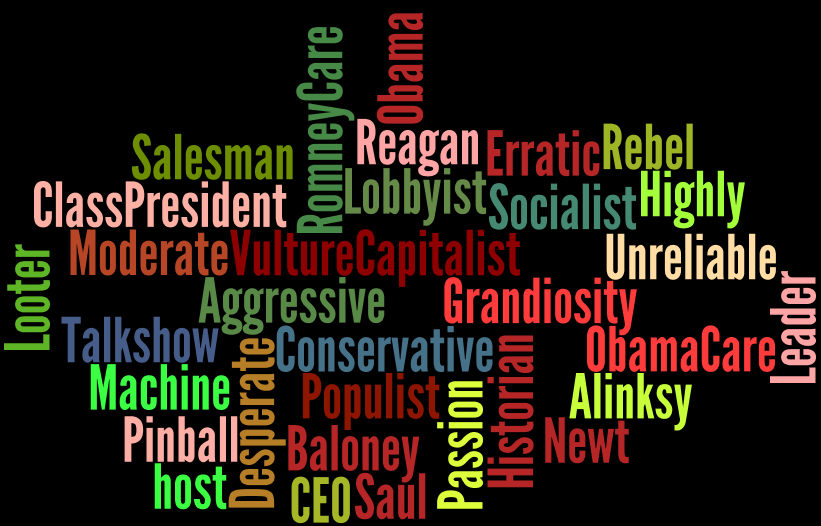 After the 18th debate, four candidates are left standing, hoping to make it to the next round. It's much like a reality TV show. Viewers of the debates are familiar with the genre, taking stock of the performers, gleaning an impression and casting their votes.

Of course, the difference is that the typical reality show has little impact on the planet, while the debates help determine the leader of the free world.

In the GOP nomination reality show, the participants have to convince voters -- as well as donors, back room power brokers and pundits -- that they deserve to carry the Republican party into the 2012 presidential election versus the evil Democrat Barack Obama.

Every day the audience gets to play along as the polls give an indication of which candidates are gaining momentum or fading in the electoral horserace.

The money likes to back winners, and as the polls go, so goes the campaign contributions and super PAC dollars which buy TV ads and ground games. For instance, following Gingrich's South Carolina victory, a super PAC supporting him received a $5 million donation to his super PAC on Monday.

What makes the debates, and campaigns overall, more like reality TV than a detailed, informative, and possibly tedious, discussion of the issues on a public TV program is the cult of personality and charisma, and occasionally some drama.

According to Mark Oppenheimer, a Yale English professor who has studied the effects of charisma, "Most American voters ultimately don't vote on specific policy questions. They're responding to something, and it's often charisma. . . . It's whom they like."

In that vein, voters tuning into the debates aren't looking for in-depth explanations of Obamacare vs. Romneycare vs. Gingrichcare. They want to know in broad strokes who is most electable. They want to get a feeling for who can they trust to create jobs, protect their rights, put money in their pockets and defend America against all kinds of enemies...and who they "like."

Lately, the broad strokes are more like whiplashes flicking back and forth as the candidates assault each others' character.

As in reality shows like "Survivor," the four candidates vying for the nomination are continuously sizing up their competitors, trying to exploit their weaknesses and doing whatever it takes to be the last man standing.

Based on the South Carolina episodes of the GOP nomination show, Gingrich is the alpha candidate of the moment. His lacerating verbal shots at the media, Romney and the president have provided red meat for Republican voters frustrated with government and looking for a tough fighter, and debater, who can take on the president. The former speaker has proclaimed that his debate performance shows clearly that he is best qualified to go toe-to-toe with President Obama.

During campaign stops in Tampa prior to the debate Monday, Gingrich and Romney escalated their sniping.

"He's gone from pillar to post almost like a pinball machine, from item to item in a way which is highly erratic," Romney said. "It does not suggest a stable, thoughtful course which is normally associated with leadership.

Gingrich responded to the Romney's assault on his mental stability: "This is such baloney. It used to be pious baloney; now it's just desperate baloney. As president, he'll be able to open a delicatessen."

In this evening's first Florida episode, however, the overall tone was less combative and the audience was not a factor. Romney and Gingrich were clearly the stars of the show, and at times appeared to be having their own debate. Rick Santorum and Ron Paul didn't get much of a word in for the first 14 minutes of the debate.

Romney did his best to assert himself more aggressively than in past debates and cast doubt on Gingrich's contention that he wasn't lobbying when his firms took in $1.6 million from Freddie Mac. He labeled him an "influence peddler."

Gingrich may have been seething inside, but he didn't exhibit the aggressive, righteous indignation tone he applied in the South Carolina debates and Monday Florida appearances in response to Romney's assault on his integrity.

He calmly said he didn't want to "spend the evening trying to chase Governor Romney's misinformation," noted "at least four things that are false" and promised to publish an explanation tomorrow on his website. Like a contestant in a reality show, in this case a candidate in the midst of the rough and tumble campaign for the job of facing Barack Obama on the debate stage, Gingrich changed his tactic in hope of keeping himself firmly in the game.

Tune into the next episode of the GOP race for the nomination reality show on the debate stage Thursday night to see who survives to the next round.