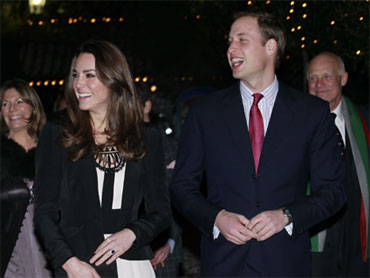 Prince William may be second-in-line to the British throne, but right now, he's just a working man, on active duty as a search and rescue pilot.

Off-shift, he goes back to the rented cottage he and finance Kate Middleton share near the sea on an island in Wales.

They don't have any servants.

But how long, in their public royal roles, will they be able to cook, clean and do their own shopping?

"I think," says Roya Nikkhah, royal correspondent for the Sunday Telegraph, a British newspaper, "the image they are trying to portray is that these are the new, modern, young royals who don't need a coitterie of staff to help them get on with their daily lives."

William's father, Prince Charles, is reported to have 149 staffers -- 25 of them personal servants, like valets and butlers.

And at Buckingham Palace, armies of servants have their work cut out for them: It takes three days just to lay the table for a state banquet, notes CBS News Correspondent Elizabeth Palmer.

"It probably has a little bit to do with a lifestyle decision and a security decision," Nikkhah says. " … Prince William will be very aware of breaches of trust experienced by members of the royal family over the years."

William may have learned a lesson from his mother, Princess Diana, who learned the hard way that good staff can be hard to find, Palmer observes.

Her butler, Paul Burrell, betrayed her -- and made millions selling a line of tacky souvenirs.

Then there was the tabloid reporter who went undercover and got a job as a palace footman.

But Kate and William are said to want minimal staff for one simple reason: to guard their privacy in this celebrity-obsessed world.