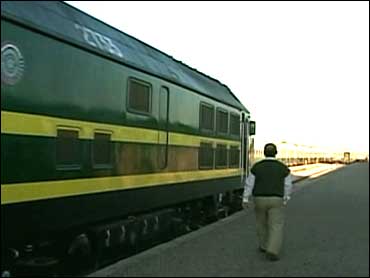 A $40 million prison sits in the desert north of Baghdad, empty. A $165 million children's hospital goes unused in the south. A $100 million waste water treatment system in Fallujah has cost three times more than projected, yet sewage still runs through the streets

As the U.S. draws down in Iraq, it is leaving behind hundreds of abandoned or incomplete projects. More than $5 billion in American taxpayer funds has been wasted - more than 10 percent of the some $50 billion the U.S. has spent on reconstruction in Iraq, according to audits from a U.S. watchdog agency.

That amount is likely an underestimate, based on an analysis of more than 300 reports by auditors with the special inspector general for Iraq reconstruction. And it does not take into account security costs, which have run almost 17 percent for some projects.

There are success stories. Hundreds of police stations, border forts and government buildings have been built, Iraqi security forces have improved after years of training, and a deep water port at the southern oil hub of Umm Qasr has been restored.

Even completed projects for the most part fell far short of original goals, according to an Associated Press review of hundreds of audits and investigations and visits to several sites. And the verdict is still out on whether the program reached its goal of generating Iraqi good will toward the United States instead of the insurgents.

Col. Jon Christensen, who took over as commander of the U.S. Army Corps of Engineers Gulf Region District this summer, said the federal agency has completed more than 4,800 projects and is rushing to finish 233 more. Some 595 projects have been terminated, mostly for security reasons.

Christensen acknowledged that mistakes have been made. But he said steps have been taken to fix them, and the success of the program will depend ultimately on the Iraqis - who have complained that they were not consulted on projects to start with.

"There's only so much we could do," Christensen said. "A lot of it comes down to them taking ownership of it."

The reconstruction program in Iraq has been troubled since its birth shortly after the U.S.-led invasion in 2003. The U.S. was forced to scale back many projects even as they spiked in cost, sometimes to more than double or triple initial projections.

As part of the so-called surge strategy, the military in 2007 shifted its focus to protecting Iraqis and winning their trust. American soldiers found themselves hiring contractors to paint schools, refurbish pools and oversee neighborhood water distribution centers. The $3.6 billion Commander's Emergency Response Program provided military units with ready cash for projects, and paid for Sunni fighters who agreed to turn against al Qaeda in Iraq for a monthly salary.

But sometimes civilian and military reconstruction efforts were poorly coordinated and overlapped.

Iraqis can see one of the most egregious examples of waste as they drive north from Baghdad to Khan Bani Saad. A prison rises from the desert, complete with more than two dozen guard towers and surrounded by high concrete walls. But the only signs of life during a recent visit were a guard shack on the entry road and two farmers tending a nearby field.

In March 2004, the Corps of Engineers awarded a $40 million contract to global construction and engineering firm Parsons Corp. to design and build a prison for 3,600 inmates, along with educational and vocational facilities. Work was set to finish in November 2005.

But violence was escalating in the area, home to a volatile mix of Sunni and Shiite extremists. The project started six months late and continued to fall behind schedule, according to a report by the inspector general.

The U.S. government pulled the plug on Parsons in June 2006, citing "continued schedule slips and ... massive cost overruns," but later awarded three more contracts to other companies. Pasadena, Calif.-based Parsons said it did its best under difficult and violent circumstances.

Citing security concerns, the U.S. finally abandoned the project in June 2007 and handed over the unfinished facility to Iraq's Justice Ministry. The ministry refused to "complete, occupy or provide security" for it, according to the report. More than $1.2 million in unused construction material also was abandoned due to fears of violence.

The inspector general recommended another use be found for the partially finished buildings inside the dusty compound. But three years later, piles of bricks and barbed wire lie around, and tumbleweed is growing in the caked sand.

"It will never hold a single Iraqi prisoner," said inspector general Stuart Bowen, who has overseen the reconstruction effort since it started. "Forty million dollars wasted in the desert."

Another problem was coordination with the Iraqis, who have complained they weren't consulted and often ended up paying to complete unfinished facilities they didn't want in the first place.

"Initially when we came in ... we didn't collaborate as much as we should have with the correct people and figure out what their needs were," Christensen said. He stressed that Iraqis are now closely involved in all projects.

One clinic was handed over to local authorities without a staircase, said Shaymaa Mohammed Amin, the head of the Diyala provincial reconstruction and development committee.

"We were almost forced to take them," she said during an interview at the heavily fortified local government building in the provincial capital of Baqouba. "Generally speaking, they were below our expectations. Huge funds were wasted and they would not have been wasted if plans had been clear from the beginning."

As an example, she cited a date honey factory that was started despite a more pressing need for schools and vital infrastructure. She said some schools were left without paint or chalkboards, and needed renovations.

"We ended up paying twice," she said.

In some cases, Iraqi ministries have refused to take on the responsibility for U.S.-funded programs, forcing the Americans to leave abandoned buildings littering the landscape.

"The area of waste I'm most concerned about in the entire program is the waste that might occur after completed projects are handed over to the Iraqis," Bowen said.

The U.S. military pinned great hopes on a $5.7 million convention center inside the tightly secured Baghdad International Airport compound, as part of a commercial hub aimed at attracting foreign investors. A few events were held at the sprawling complex, including a three-day energy conference that drew oil executives from as far away as Russia and Japan in 2008, which the U.S. military claimed generated $1 million in revenues.

But the contracts awarded for the halls did not include requirements to connect them to the main power supply. The convention center, still requiring significant work, was transferred to the Iraqi government "as is" on Jan. 20, according to an audit by the inspector general's office.

The buildings have since fallen into disrepair, and dozens of boxes of fluorescent lightbulbs and other equipment disappeared from the site. Light poles outside have toppled over and the glass facade is missing from large sections of the abandoned buildings.

Waste also came from trying to run projects while literally under fire.

The Americans committed to rebuilding the former Sunni insurgent stronghold of Fallujah after it was destroyed in major offensives in 2004. The U.S. awarded an initial contract for a new waste water treatment system to FluorAMEC of Greenville, S.C. - just three months after four American private security contractors were savagely attacked. The charred and mutilated remains of two of them were strung from a bridge in the city.

An audit concluded that it was unrealistic for the U.S. "to believe FluorAMEC could even begin construction, let alone complete the project, while fierce fighting occurred daily." The report also pointed out repeated redesigns of the project, and financial and contracting problems.

The Fallujah waste water treatment system is nearly complete - four years past the deadline, at a cost of more than three times the original $32.5 million estimate. It has been scaled back to serve just a third of the population, and Iraqi officials said it still lacks connections to houses and a pipe to join neighborhood tanks up with the treatment plant.

Desperate residents, meanwhile, have begun dumping their sewage in the tanks, causing foul odors and running the risk of seepage, according to the head of Fallujah's municipal council, Sheik Hameed Ahmed Hashim.

"It isn't appropriate for the Americans to give the city these services without completing these minor details," Hashim said. "We were able to wipe out part of the memories of the Fallujah battles through this and other projects. ... If they leave the project as it is, I think their reputation will be damaged."

By contrast, the Basra children's hospital - one of the largest projects undertaken by the U.S. in Iraq - looks like a shining success story, with gardeners tending manicured lawns in preparation for its opening. But that opening has been repeatedly delayed, most recently for a lack of electricity.

The construction of a "state of the art" pediatric specialist hospital with a cancer unit was projected to be completed by December 2005 for about $50 million. By last year, the cost had soared above $165 million, including more than $100 million in U.S. funds, and the equipment was dated, according to an auditors' report.

Investigators blamed the delays on unrealistic timeframes, poor soil conditions, multiple partners and funding sources and security problems at the site, including the murder of 24 workers. Bechtel, the project contractor, was removed because of monthslong delays blamed on poor subcontractor performance and limited oversight, the special inspector general's office said. A Bechtel spokeswoman, Michelle Allen, said the company had recommended in 2006 that work on the hospital be put on hold because of the "intolerable security situation."

In an acknowledgment that they weren't getting exactly what they hoped for, Iraqi officials insisted the label "state of the art" be removed from a memorandum of understanding giving them the facility. It was described as a "modern pediatric hospital."

"The opening will take place soon, God willing," he said.

Residents are pleased with the outcome. One, Ghassan Kadhim, said: "It is the duty of the Americans to do such projects because they were the ones who inflicted harm on people."
By Associated Press Writer Kim Gamel