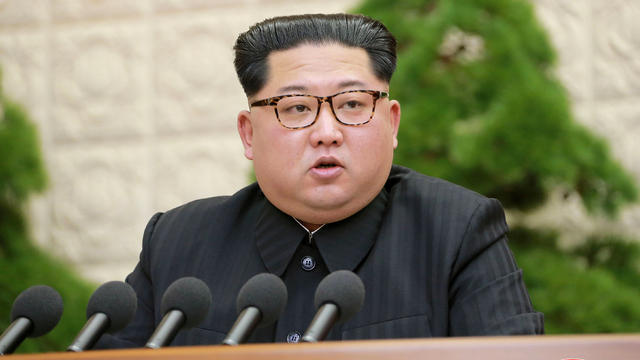 As the date for the planned U.S.-North Korea summit quickly approaches, the United States is demanding that North Korea start to dismantle its nuclear warheads, nuclear materials and intercontinental ballistic missiles overseas and move them out of North Korea within the next six months, according to The Asahi Shimbun, a Japanese newspaper. An exact overseas location has not been disclosed.

Shipping out the warheads is one of the ideas that was floated by the U.S. as a concrete, irreversible action that North Korea could take as a positive first step that would also be considered a confidence-building measure. Secretary of State Mike Pompeo told CBS News' Margaret Brennan on "Face the Nation" last week that North Korea would receive sanctions relief, should it follow through with "total" and "complete" denuclearization.

"If we get if we get denuclearization, of course there will be sanctions relief. Certainly. There will be more than that. There'll be -- the president has a commitment and he will make this commitment to Chairman Kim, I am confident, that says, 'If you do the things we need to do so that America is no longer held at risk by your nuclear weapons arsenal and that you get rid of your [chemical and biological weapons] program and missiles that threaten the world, we will ensure that your people have the opportunity for the greatness' that I know Chairman Kim wants them to have," Pompeo said Sunday.

North Korea is "cautiously" estimated to have assembled perhaps 10 to 20 nuclear weapons and may have produced enough fissile material for 30 to 60 nuclear weapons, according to a report published in January in the Bulletin of the Atomic Scientists.

The Wall Street Journal reported Thursday that a senior U.S. official and South Korean adviser have also proposed a partial -- rather than a full -- surrender of nuclear arms and missiles by the North. On Wednesday, North Korea rejected National Security Adviser John Bolton's suggestion that the U.S. favored the approach taken with Libya's nuclear disarmament. Asked by CBS News' Brennan on "Face the Nation" last month whether it was a requirement that Kim "agree to give away those weapons before you give any kind of concession," Bolton replied, "I think that's right. I think we're looking at the Libya model of 2003, 2004."

Libyan leader Muammar Gaddafi agreed to end his nuclear weapons program in exchange for sanctions relief in 2003, and he was ousted from power and killed in 2011.

The U.S. has also made assurances that it is not seeking regime change. Asked directly if the U.S. isn't trying to oust Kim Jong Un from power, Pompeo said in private meetings he told him that "what President Trump wants is to see the North Korean regime get rid of its nuclear weapons program in completely and in totality and in exchange for that, we are prepared to ensure that the North Korean people get the opportunity that they so richly deserve." He told "Fox News Sunday" over the weekend, "We will have to provide security assurances, to be sure."

When asked about such security assurances in an Oval Office meeting with NATO Secretary General Jens Stoltenberg on Thursday, President Trump said he's "willing to do a lot."

"He [Kim] will have very adequate protection and we'll see how it all turns out," Mr. Trump added.

Pompeo also raised the issue of regime change during his confirmation hearing, saying he has "never advocated" for such a measure.

While assurances have been promised privately, they've also pledged publicly as far back as August 2017 by former Secretary of State Rex Tillerson who vowed to not to seek "regime change nor a collapse" in North Korea.

North Korea has threatened to call off a summit between its leader Kim Jong Un and President Trump that's scheduled to take place June 12, and it abruptly canceled a high-level meeting with South Korea that was supposed to be Thursday. Still, the White House says Mr. Trump is ready -- whether the meeting with Kim takes place as scheduled or is postponed.

"If the conditions are right, the president has said that he's ready to go," White House counselor Kellyanne Conway told reporters at the White House on Thursday. "He's ready to go on June 12. But we're watching the situation. We saw this morning that North Korea apparently, allegedly, sent out a statement about South Korea. They want something to be clarified there. But this president has made very clear from the beginning that if the conditions are right, that he will go and have the summit."

Conway added, "So it may not happen that quickly, it may happen later but this president is ready if everything is on track."