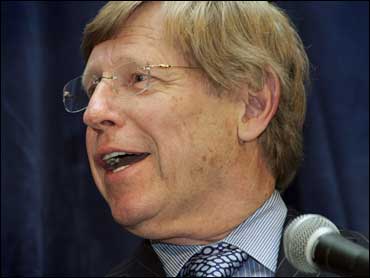 Former Solicitor General Theodore Olson has turned down an offer to join President Trump's legal team, a partner at Gibson, Dunn & Crutcher, where Olson works, said Tuesday. Ted Boutrous tweeted, "I can confirm that @gibsondunn and Theodore B. Olson will not be representing @realDonaldTrump."

President Trump's legal team had sought Olson, one of the country's top litigators, to help navigate special counsel Robert Mueller's investigation of Russian meddling in the 2016 presidential election, the Washington Post reported. Olson considered the offer and analyzed possible conflicts of interest with his current firm, Gibson, Dunn & Crutcher in Washington before turning down the offer.

The hiring of former U.S. attorney and pundit Joe diGenova was announced by the Trump legal team Monday, after the president attacked Mueller by name for the first time on Twitter.

Already, diGenova has doubled down on criticism of the FBI, calling FBI Director Chris Wray an "embarrassment" over his handling of FBI Deputy Director Andrew McCabe's firing.