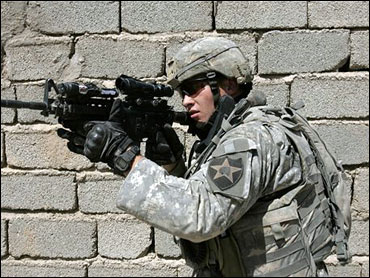 The report underscored the difficulty of Mr. Bush's argument that continued American sacrifice was creating space for Iraqi leaders to make gains on tamping down the sectarian fighting that leaves Iraq persistently fractured and violent. Mr. Bush reinforced that theme in an appearance Friday at a Marine base in Quantico, Va.

"There's a lot of courage in Iraq," he said after having lunch with about 250 Marines, family members and officers. "The Iraqis are in the fight, but I also made it clear to them that we expect the Iraqi government to enhance national reconciliation through the passage of law."

At the Gerald R. Ford Presidential Museum in Michigan, Vice President Dick Cheney said "the troop surge has achieved solid results and in a relatively short period of time."

Their optimistic view was contradicted somewhat by the administration's release Friday of a required status report on Iraqi benchmarks.

Friday's follow-up report to Congress concluded that Iraqis have done enough to move only one benchmark - allowing former members of Saddam Hussein's Baath Party to hold government positions - from the unsatisfactory to satisfactory column.

The shift was due to a pact made last month among leading Iraqi politicians from all major sects. Iraqi officials have announced similar deals in the past only to have them fall apart.

"The overarching goal of de-Baathification reform is political accommodation between the Shia and Sunni communities," the report said. "The leaders' agreement combined with the return of former Baathists to civic life is a significant step in that regard."

Bush officials said there hadn't been nearly enough time between the July report and now - just two months - for more improvement. White House press secretary Tony Snow said in a statement accompanying the report that there have been other, equally important developments, including passage of a budget, the sharing of oil revenues among the provinces even without legislation and local reconciliation efforts that could trickle up to Baghdad.

"These are precisely the 'effects' the benchmarks were intended to produce, even if the formal benchmarks themselves have not been met," Snow said.

In a separate report, the State Department concluded Friday that religious freedom has sharply deteriorated in Iraq over the past year.

In the president's 18-minute address Thursday, he said 2,200 Marines will come home from Anbar province this month, an Army brigade of about 3,500 will begin leaving soon for a total of 5,700 troops home by Christmas.

All of these troops were due to come home anyway, reports CBS News senior White House correspondent Bill Plante, but they are not being replaced.

Five more combat brigades plus support troops will be home by June for a total of at least 27,000. That will leave about 130,000 troops in Iraq, roughly the same number that were there when the surge began.

"There is no plan 'to win,' " said Sen. Joe Biden, D-Del, a Democratic presidential candidate and chairman of the Foreign Relations Committee. "No plan how to leave. No plan how to end this. It's just a plan to keep ... all the venom from spilling out over the region, and we're using somewhere between 160,000 to 130,000 troops to do that. The bottom line of it is that we are no safer."

Friday's report said: "What is important is the overall trajectory which, under our present strategy, has begun to stabilize and turn upward, compared to the deteriorating trajectory seen over the course of 2006."

Democrats, still unable to muster enough votes to force an end to the war, hope to win veto-proof support for some sort of anti-war legislation. Debate is expected to resume next week in the Senate. One proposal is expected to narrow the mission, for a presumably smaller U.S. force, to only training Iraq's military and police, protecting U.S. assets and fighting terrorists. Another would require troops spend as much time at home as they do in combat.

"Democrats know that they do not at this point have the votes in the Senate to force the president to go faster," said CBS News chief Washington correspondent Bob Schieffer.

Mr. Bush said in Thursday night's speech that the U.S. engagement will stretch beyond his presidency. But he hinted further reductions were possible before he leaves office.

He said his decisions would be guided by the principle of "return on success" - the rhetorical replacement for his oft-repeated condition that coalition forces would only "stand down" as Iraqi troops "stand up."