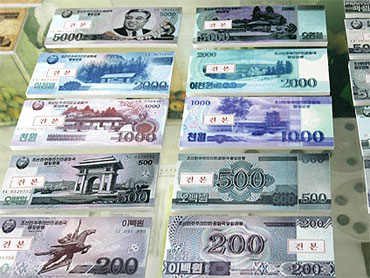 In November, North Korea redenominated its currency as part of efforts to lower inflation and reassert control over the country's nascent market economy. However, the measure reportedly worsened the country's food situation by forcing the closure of markets and sparked anger among many North Koreans left with piles of worthless bills.

Pak was accused of ruining the nation's economy in a blunder that also damaged public opinion and had a negative impact on leader Kim Jong Il's plan to hand power over to his youngest son, Yonhap said.

Citing its sources, Yonhap said many North Koreans believe the government used Pak as a scapegoat for the failed currency reform.

Park Sang-hak, a North Korean defector in Seoul who is a key organizer of a campaign to send anti-government leaflets into the North, said a contact there told him in a recent telephone conversation that there were rumors Pak was either executed or sent to a political prison.

Despite tough restrictions, some North Koreans are able to communicate with the outside world using Chinese cell phone networks, according to defectors.

North Korea has reopened hundreds of markets since the botched reform, but the prices of the few goods available have continued to rise, according to Lee Seung-yong, an official of Good Friends, a Buddhist-affiliated group that sends food and other aid to the North.

Pak was last mentioned by the North's official Korean Central News Agency in January when he accompanied Kim on an inspection trip. Kim sacked Pak following arguments within the country's leadership over who should take responsibility for the currency fiasco, South Korean media reported last month.

It is not unprecedented for the communist government to execute officials for policy failures.

The North faces chronic food shortages and has relied on outside assistance to feed much of its population since a famine believed to have killed as many as 2 million people in the 1990s.

North Korea is regarded as having one of the world's worst human rights records with public executions, camps for political prisoners and torture.