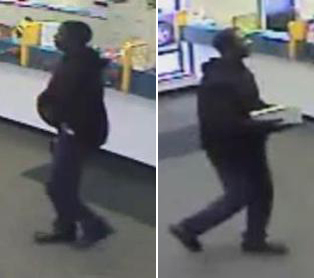 WATERFORD, Mich. - Police are searching for a man who they say tied up a clerk and robbed a cash advance store in Oakland County, Mich. after his loan application was denied, reports CBS Detroit.

The incident happened around 12:35 p.m. Tuesday, Dec. 23 at the Advance America store in Waterford.

Police responded to a robbery call at the store and found a woman, the only employee working at the time, behind the counter with her hands and feet bound together with zip-ties, reports the station.

The woman told police she was tied up by a black male who first entered the store around 11:30 a.m. requesting a loan application. The man left the store and returned about 20 minutes later with an incomplete application and a bank statement, police said.

The woman allegedly told the man he needed to complete the application before it could be processed, and he left the business a second time. When the man returned to the store for a third time, the woman told him he would not be eligible for an advance at that time, police said.

The man then allegedly reached over the counter, grabbed the victim by the hair and pointed a pistol at her. The woman told police the man demanded money from the till before forcing her into a back room where he bound her hands and feet, reports the station.

Police said the man left the store, but quickly returned and removed the cord from the phone at the woman's work station. He then reportedly fled the scene in a burgundy-colored sedan.

The suspect is described as an older black male, approximately five feet, 10 inches tall and 170 pounds. At the time, he was wearing a black hooded jacket, dark colored pants and black shoes. The victim told police the suspect had very large feet.

Anyone with information on the suspect or the incident is urged to contact police at 248-674-2677 or Crime Stoppers at 1-800-SPEAK-UP.