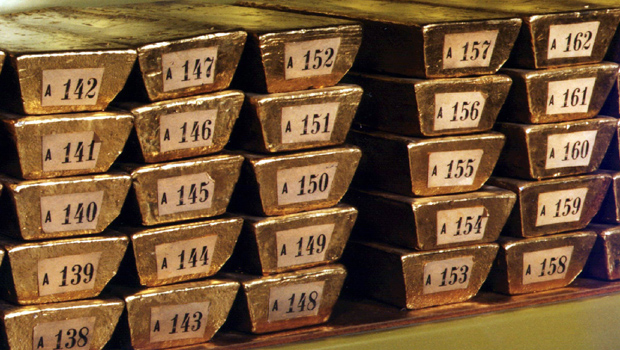 BERLIN Germany's central bank will repatriate some of its massive gold reserves stored in vaults in the United States and in France, a business daily reported Tuesday.

The Bundesbank's overall reserves of 3,400 tons are worth about $200 billion at current market rates.

The central bank now plans to bring back to Germany some of the 1,500 tons of gold stored in the vaults of the Federal Reserve in New York, and all of the 450 tons currently stashed with the Bank of France in Paris, according to Handelsblatt.

The central bank declined to comment on the report but on Wednesday will present a new plan to manage the gold reserves of 270,000 gold bars, the world's second-largest stockpile trailing only the U.S. reserves.

Most of Germany's reserves have been stored abroad since the Cold War over fears of a Soviet invasion.

But the central bank came under pressure last year when Germany's independent Federal Auditors' Office last year concluded it failed to properly oversee its gold reserves. The auditor suggested the central bank should carry out regular inspections of the gold held abroad to verify its book value or change the reserves' management.

The auditors' report stunned Germany, where the Bundesbank routinely tops polls of the nation's most trusted institutions. The central bank was taken aback and maintained it didn't see the need for more scrutiny in overseeing the reserves, saying "there is no doubt about the integrity of the foreign storage sites."

But the debate on the gold reserves, most of which are held by foreign authorities, caused some inevitable conspiracy theories questioning their very existence. Several politicians then jumped on the issue and called for some of the reserves to be repatriated.

Since the postwar days, when Germany worried about a possible land war with the Soviet bloc, most of the reserves have been kept in the vaults abroad. Just under half of them are now stored in New York, a little more than 10 percent each in London and Paris, with the remaining third kept in vaults at the Bundesbank's headquarters in Frankfurt.