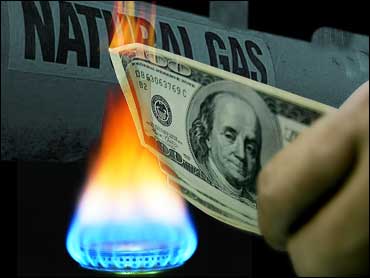 When 65-year-old Phyllis Brooks opened her January gas bill and saw the numbers — $353.99 — the retired Chicago postal worker was stunned.

"A $200-a-month jump, that would make anybody sit up and pay attention," Brooks says.

Across the nation, natural gas bills are up 17 percent over last winter — and 18 percent in the Midwest. On Wednesday, state law-enforcement officials charged that some of the jump is due to price-gouging.

Missouri Attorney General Jay Nixon says a six-month investigation by four Midwestern states concludes that gas customers are paying $5 billion a month more than they should.

"They're clearly not getting a fair deal," Nixon says. "Demand stayed even, supply stayed even, but prices jagged up basically out of control for consumers as well as small businesses across the country this winter."

Orr reports that natural gas users around the country are opening their bills, seeing numbers like $300, $400 or $500 — and feeling like they're getting ripped off.

"They are getting ripped off," Nixon says.

"It clearly is supply and demand, and the government has repeatedly investigated and found that to be the case," he says.

Horvath blames skyrocketing prices in January on the double-whammy of hurricanes Katrina and Rita, which disrupted gas supplies.

But while prices have dropped somewhat, the states' investigation says prices remain artificially high. Energy-trading markets, the report says "... are vulnerable to abuse and manipulation" and "...are less regulated than many other commodity markets."

There is no question, the report concludes, that traders bid up the cost of gas futures in the fall. Phyllis Brooks and millions of other Americans are now paying a steep price for their profits.

Orr says the attorneys general who did the investigation are not filing any charges and can't change energy policies. They are asking for more federal oversight of energy traders. But even if that does happen, consumers shouldn't look for a quick break or a rebate on their gas bills.