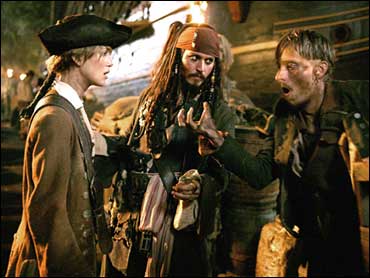 Walt Disney Co. will substantially reduce its work force and slash its annual output of films from 18 to eight — cutbacks greater than Hollywood had anticipated, it was reported Wednesday.

Additionally, Daily Variety said all the movies will be Disney-branded, suggesting diminished roles for its Touchstone label. The Hollywood trade paper said a Disney announcement was expected within 10 days.

Burbank-based Disney, basking in the glow of a record $135.6 million debut weekend box office for "Pirates of the Caribbean: Dead Man's Chest," wouldn't discuss the report.

"We are constantly evaluating our business to make it better and more efficient," Disney spokeswoman Heidi Trotta said in a prepared statement to The Associated Press.

Disney has said for some time it was going to cut its total number of films and concentrate on Disney-branded offerings, which make more money than those released by the studio's Touchstone label.

The studio has already greatly reduced the number of films released under its Miramax banner.

Disney CEO Robert Iger said in a previous conference call with the media that a shift in movie production was coming but didn't discuss details.

"It becomes a much better investment for us when we make a Disney-branded film," Iger said last September. "We're not going to go out of the non-Disney-branded live-action business, but there has been a dramatic shift."

"Most of the street was onto the fact that Disney-branded film returns were greater," he said.

Besides its success with "Pirates," Disney's fortunes have been lifted recently by it's Pixar-animated movie "Cars," which has earned more than $205 million this summer.

But the studio has also endured disappointments, including "Stick It," "Annapolis" and "The Wild."

Disney's annual motion-picture capital allocation is believed to be $450 million, Miller said. Spreading that amount over eight films instead of 18 could be better in a variety of ways, including cutting marketing and production costs, he said.