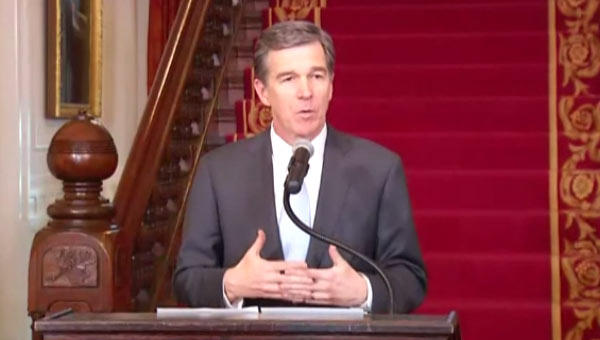 RALEIGH, N.C. -- North Carolina Gov. Roy Cooper signed legislation Thursday to roll back North Carolina’s “bathroom bill” in a bid to end the backlash over transgender rights that has cost the state dearly in business projects, conventions and basketball tournaments.

Cooper, a Democrat, signed the bill soon after the North Carolina House and Senate approved the measure earlier Thursday.

The compromise plan, announced Wednesday night by the state’s Democratic governor and leaders of the Republican-controlled legislature, was worked out under mounting pressure from the NCAA, which threatened to take away more sporting events.

Cooper had urged lawmakers to support the deal, which among other things repeals a year-old law that said transgender people have to use the public restrooms that correspond to the sex on their birth certificate.

The compromise was condemned by some on both sides, with conservatives staunchly defending the law, known as House Bill 2, and gay and transgender activists complaining that the new measure still denies them protection from discrimination. They demanded nothing less than full repeal.

Republican Sen. Dan Bishop, a primary sponsor of HB2, denounced the new deal on the Senate floor, where it was approved 32-16, with nine of 15 Democrats among the yes votes.

“This bill is at best a punt. At worst it is a betrayal of principle,” the Charlotte-area legislator said.

Republican Rep. Scott Stone, who lives in Charlotte, urged his colleagues to vote for the bill.

“We are impeding the growth in our revenue, in our ability to do more things for tourism, for teacher pay, while we have this stigma hanging over,” Stone said. “The time has come for us to get out from under the national spotlight for negative things. You can’t go anywhere on this planet without somebody knowing what is HB2 and having some perception about it.”

While the new measure eliminates the rule on transgender bathroom use, it also says state legislators -- not local government or school officials -- are in charge of policy on public restrooms.

That moratorium, according to GOP House Speaker Tim Moore and Senate leader Phil Berger, would allow time for pending federal litigation over transgender issues to play out.

Gay rights activists blasted the deal, saying it was not a true repeal.

“It doesn’t matter if you are a Democrat or a Republican, if you vote for this bill, you are not a friend of the LGBT community,” Equality North Carolina Executive Director Chris Sgro said. “You are not standing on the right side of the moral arc of history or with the civil rights community.”

The deal came as the NCAA said North Carolina sites won’t be considered for championship events from 2018 to 2022 “absent any change” in House Bill 2, which it views as discrimination. The NCAA had mentioned a deadline of noon on Thursday to make changes to the law, CBS affiliate WNCN-TV reports. North Carolina cities, schools and other groups have offered more than 130 bids for such events.

The NCAA already removed championship events from the state this year because of the law.

HB2 also prompted businesses to halt expansions and entertainers and sports organizations to cancel or move events, including the NBA All-Star game in Charlotte. An Associated Press analysis this week found that HB2 already would have cost the state more than $3.76 billion in lost business over a dozen years.

HB2 supporters argued that the bathroom law was needed to preserve people’s privacy and protect them from sexual predators. Opponents said that was nonsense and that the danger was imaginary.

Several potential compromises have failed over the past year, including one during a special session in December that collapsed amid partisan finger-pointing.