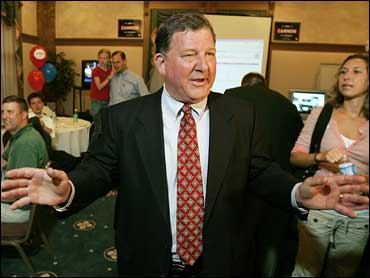 U.S. Rep. Chris Cannon said his solid victory in Utah's Republican primary is good news for President Bush and those seeking a consensus on immigration policy this year.

"I hope what it means is Republicans look at this and realize we don't have to be divided on the issue of illegal immigration," Cannon said.

The five-term incumbent defeated political newcomer John Jacob on Tuesday, 56 percent to 44 percent — or 32,306 votes to 25,589 votes — with all precincts reporting but an unknown number of absentee ballots to be counted.

"This is a big margin of victory. It says a lot about Republicans getting together and solving this problem," he said.

The victory came after a race that focused mainly on whether millions of illegal immigrants should be forced to return to their home country before getting an opportunity to return to the U.S.

Jacob portrayed Cannon as soft on illegal immigration. Cannon made the same criticism against his Democratic incumbent in winning the seat in 1996.

Last December, Cannon voted for a House bill that would toughen border security, criminalize people who help illegal immigrants and make being in the U.S. without the required papers a felony. But he also supports Bush's proposal for a guest-worker program.

Cannon's willingness to compromise made him a target of Team America, a conservative group that calls illegal immigration the most critical problem facing the nation. It spent $40,000 on radio ads criticizing him.

Jacob favored returning illegal immigrants to their home countries before giving them a shot at U.S. citizenship and punishing businesses for hiring them.

Both men had said if Cannon lost the primary that House Republicans were likely to be unwilling to negotiate with the U.S. Senate on its bill on illegal immigration because they would fear losing their own elections on the issue.

Jacob made headlines last week by suggesting that Satan has had a hand in difficulties faced by his campaign.

Cannon will face Democrat Christian Burridge, among others, in the November general election in the heavily Republican district, which stretches south from Salt Lake County and west to Nevada. It is predominantly Mormon and white. Hispanics make up about 10 percent of the population.

In other states' primary runoffs Tuesday: