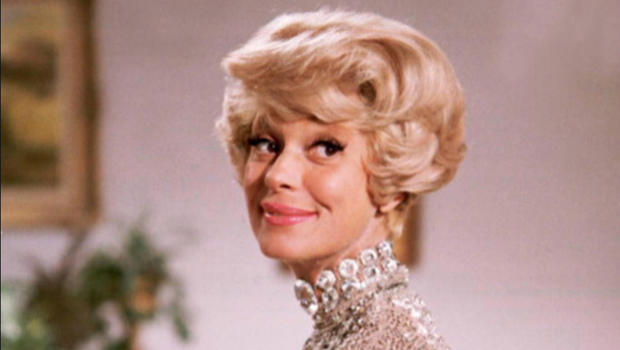 This past Wednesday, the night Broadway dimmed its lights in honor of Carol Channing, happened to be the 55th anniversary of the opening of "Hello, Dolly!" at the St. James Theatre.

Carol Channing was a big, sunny celebration on stage. Try, just try not to smile, when you see her sashaying along in her plumage. Even in old video, she has you at "hello."

"I got offstage and said, 'Oh God, please let me back on center stage. It's the safest place in the world to be.' It still is!"

She was 84 then, center-stage in a one-woman show called "Razzle Dazzle," which she also called "The First 80 Years Are the Hardest."

The song is from "Gentlemen Prefer Blondes." Marilyn Monroe starred in the 1953 movie, but Channing was first, opening on Broadway as the gold-digging Lorelei Lee in December 1949. A month later, she was on the cover of Time magazine.

Time's drama critic wrote: "Perhaps once in a decade a nova explodes above the Great White Way with enough brilliance to reillumine the whole gaudy legend of show business."

At 28, Channing was a star, and would remain so for the rest of her life – nearly seven decades.

Even for Americans who didn't get to see Broadway shows, Carol Channing was a household name because of television.

She knew just how to use those dinner plate eyes and the raspy voice. It was as if she couldn't help but be funny. Here she is with Goldie Hawn on "Laugh-In":

Channing didn't do many movies, but "Thoroughly Modern Millie" earned her an Oscar nomination.

What upped Channing from star to legend, though, was "Hello, Dolly!"

It opened on Broadway in 1964. Matchmaker Dolly Levi was the perfect vehicle for her extravagance. "Dolly!" won her the first of three Tonys, beating out Barbra Streisand in "Funny Girl."

But it was Streisand who played Dolly in the 1969 movie. Channing was furious. "I was coming from London to New York on the plane when they showed 'Hello, Dolly!,' so I got kind of airsick when I saw Barbra Streisand!" she laughed.

The film was not a commercial success, so in a way, Channing had the last laugh. She owned the role on the stage for the next 30 years, playing dolly on road tours and in multiple revivals well into her seventies, racking up by her count more than 5,000 performances -- famously almost never missing any.

Unfortunately, for her understudy, Lisa Carroll, who almost got to go on for her once.

"In Los Angeles, Carol got total laryngitis, and I was called upon to come on, and I was already in gowns and everything, and I stood in the wings, and then she walked right in, and from complete laryngitis, this voice came out that was so thrilling," recalled Carroll. "So, she had a tie-in with God, I guess!"

Channing said, "I got every virus and bug in every state all over the world, but I didn't miss there. If I did the show, I found at the end of each show, I realized I feel better, or I'm cured, and that included cancer."

Her public saw the performance, not the pain. Not until she published a memoir in 2002, at the age of 81, did she open up about surviving ovarian cancer. In the book she wrote that when she was 16 her mother revealed that her father was part black.

She also wrote about her first love, Harry Kullijian. They reconnected. "He tells me now that he looked at me, and he knew, 'That's it, I've got to marry her,' before we even said hello, before we even hugged," she recalled.

"Happily ever after" for them meant eight years, promoting and supporting arts education in schools together, until Harry's death in 2011.

Something you may not know about Carol Channing: her one child, Chan Lowe, is a Pulitzer Prize-nominated political cartoonist.

A lot of other people did.

But Carol Channing was a very big deal, who always managed to pull it off, whatever it was, 'til the very end.