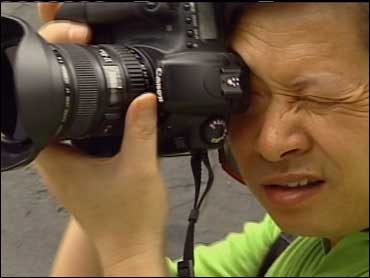 I'm Barry Petersen and this Letter from Asia comes from Beijing. Unless you're living on another planet, you know that China is going through a major economic boom. It's getting ready to show it off at the 2008 Summer Olympics.

We can show you what it will look like once the construction is done. Buildings that seem like they defy the sheer logic of gravity. But this is not about what the buildings are, it's about where they are.

The need for more sites for more skyscrapers is the death knell for the tiny neighborhoods of Beijing called hutongs. The hutongs were laid out in the 1400 when Ming emperors built their capital here, a series of small alleyways and tiny streets. There were once three thousand; Today, fewer than half that exist. More disappear daily.

Enter the amateur brigade trying to save, if nothing else, the memories. Their digital cameras feed a web site, the best of technology to preserve the oldest of Beijing. One man says "The hutongs are an inheritance of history and culture. An architectural history of 800 years won't be seen in a skyscraper." In fact, there aren't many records of the hutongs. Not so long ago, few people here could afford cameras or film.

Some residents don't mind being moved to new high rises with indoor toilets. But for others, a high rise apartment on the outskirts of town will never feel the same. One woman says, "I spent my childhood playing at my grandparents' house in the hutongs. Cars weren't allowed, so it was calm. I would hang out with my friends and play games."

China is proud of its emerging metropolis. And not many are looking back and seeing that it means losing neighborhoods where young and old are together - where friends watch out for friends, and where people have lived for generations.

Centuries of memories; Once they're gone, they are lost forever.
By Barry Petersen