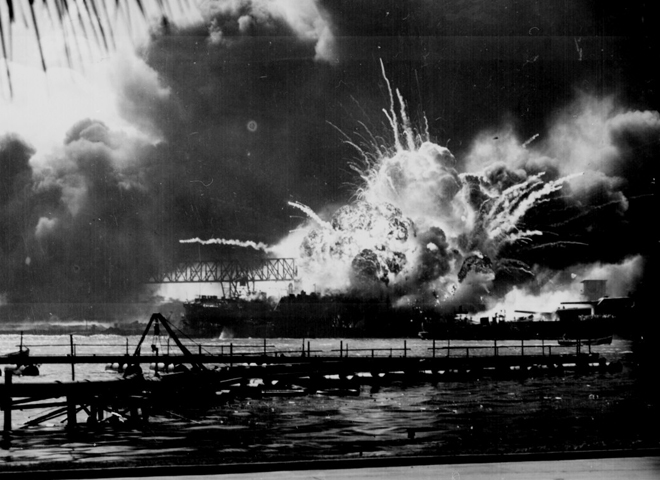 The Japanese attack on December 7th,1941, sparked the defiant battle cry: "REMEMBER PEARL HARBOR." And even 75 years later, the dwindling ranks of those who watched the attack happen remember it still. Our Cover Story is reported by Lee Cowan:

Hawaii's Pearl Harbor: It was just a place before it became a memorial … a tropically tranquil place that was Dorinda Nicholson's childhood home.

Dorinda was just six years old that Sunday in 1941. Born in Hawaii -- her family was civilian -- she lived near the dock for the famous Pan Am Clippers. The idea of war coming to this remote Pacific outpost seemed to most here about as likely as a white Hawaiian Christmas.

"They were coming right over the house," she said of the planes. "Right overhead, canopies pushed back, and you could see the pilot's faces, they were that close."

"And what did you think when you saw that?" Cowan asked.

"I just leaned closer to my dad and hugged him a little closer," Nicholson sighed.

Six Japanese aircraft carriers had sailed to within 300 miles of the Hawaiian Islands, loaded with fighters, torpedo planes and bombers. They were on Oahu in minutes, like a swarm of angry mosquitoes.

Dorinda's family fled to the relative safety of the island's sugarcane fields, but Navy Seaman Dick Girocco had nowhere to go. He high-tailed it to a nearby ditch for cover.

He had joined the Navy at age 19, and was part of the crew that manned the PBY Catalina "flying boats" out of the naval air station at Ford Island.

He told Cowan the bombs were falling with 100 yards of his position. "When I first went in it, I was laying at the bottom of it. And another fella come in jumping on top of me, laid right on top of me," he said. "And he was saying Hail Marys as fast as he could say 'em, and I says, 'Well, that takes care of that part, I don't have to do that!'"

But then, a Japanese pilot spotted him.

"This fella says, 'Well, you mind as well turn over and watch this,'" Girocco recalled. "Dumb me, I turn over, and I'm looking up at a dive bomber coming down."

"Oh, yeah. Banked out over the airfield and looked right down in the ditch, and I could look him right in the eye."

Hangar 79, just one down from where Girocco was, still bears the scars -- the bullet holes in its bright blue window panes remain, reminders of the serenity shattered on a quiet Sunday morning.

Cowan asked, "Were you mad? Were you angry? Confused?"

"I don't really recall whether I was angry or not," Girocco said. "A lot of people ask me if I was scared. And I'm sure I was. If I wasn't, something's wrong with me."

At the Army Air Corps' Hickam Airfield nearby, the Japanese assault continued. Parked wingtip-to-wingtip, nearly every American warbird was incinerated before ever taking flight.

But Japan's real target was "Battleship Row." Within minutes, the California was sinking, and the Oklahoma had capsized, trapping hundreds in her hull.

Ninety-five-year-old Delton "Wally" Walling was perched high in a patrol tower that day, and saw it all unfold.

"The whole side of Battleship Row, clear down to the Arizona, is covered with flames, and people in the water swimming, trying to get out," he said. "It was a terrible, terrible scene.

"Can you imagine how I'm feeling now, when I'm watching my great Navy get stuffed down my throat? I'm devastated. Man!"

It got worse. Not far away, the destroyer Shaw exploded with such ferocity, it sent pieces flying a half-mile away. "That almost knocked us off of the tower," Walling said.

But it was the Arizona that got the worst of it. Hit by armor-piercing bombs, it, too, exploded, killing 1,177 -- the single largest loss of life in American naval history. Her hull is still in the mud where she sank.

The Arizona remains the final resting place for most of her crew, including 23 sets of brothers -- family who died shoulder-to-shoulder, fighting a war that hadn't even been declared yet.

"When we talked to people, they will say, 'Oh, my father or my grandfather wouldn't tell us anything until he was 60 or 70 years old,'" said New York Times best-selling author Craig Nelson. "They were told to forget about it, to just get on with their lives and forget it."

Nelson has spent the last five years compiling one of the most recent accounts of Pearl Harbor: "Pearl Harbor: From Infamy to Greatness" (Simon & Schuster).

"It completely transformed the United States," Nelson said. "At that moment we were the 14th military power in the world, behind Sweden."

"So it served really as a rallying cry in a way?" Cowan said.

"It made us put on our big-boy pants and grow up and become a global leader."

The U.S. did bounce back, in double time. All but three of the ships damaged or sunk on December 7 were raised, repaired, and sailed again.

In fact, by the end of the war, the U.S. had chased down and destroyed every Japanese aircraft carrier used to launch the attack.

"This is the greatest generation in the world, and we're down to a handful left," said Walling.

Like most of the other 40,000 or so enlisted men on Oahu that day, he was a just teenager back then. But history's clock is relentless.

"I see their faces right before me, and know they're gone," said Pearl Harbor's chief historian, Daniel Martinez, who has worked here for 32 years. And with each passing anniversary, he worries the collective memory of December 7th is fading.

"Most of the young people that come here don't have a clue what happened at this place," Martinez said. "They don't even know who won the war. How will we remember World War II after they're gone?"

Dorinda Nicholson now lives in Kansas City, Missouri, but she has made the nearly 5,000-mile trip to Oahu for almost every Pearl Harbor anniversary, to tell her story -- sometimes carrying the tiny gas mask that she and her brother wore as children in the days after the attack.

Why did she keep it all these years? "Oh, it's my history," she said.

It was history that changed her life, and ours.  The cry "Remember Pearl Harbor" sounds pretty obvious, but the challenge for the next generation is to really remember, absent those who will no longer be able to remind us face-to-face.

"They are my heroes," said Walling. "And I will tell their stories as long as I live."