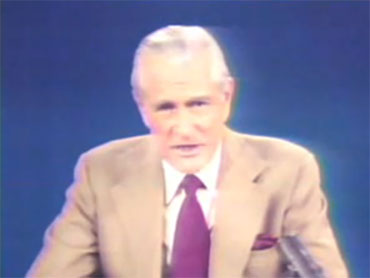 Last week, the North Dakota Humanities Council asked many of us who were friends and colleagues of Eric Sevareid to come to Bismarck for a symposium on the life and work of this North Dakotan who was such a towering figure in the history of journalism.

What a pleasure it was to just pause and think about this man who had so much influence on all of us who've been lucky enough to be reporters during one of the most remarkable chapters in American history - the last half of the Twentieth Century and the beginning of the Twenty First.

I was just a rookie in the Washington Bureau when I first encountered him in 1969, and already he was a storybook character you couldn't have made up - one of Ed Murrow's boys, the reporters who invented broadcast journalism as they covered World War II, a dashing correspondent who later escaped a tribe of cannibals in the jungles of Burma, who went on to become the grey eminence who analyzed the news on Walter Cronkite's broadcast.

Today, as we think about the vulgarity and personal attacks into which so much of our national conversation has fallen because too many have convinced themselves there can be only one side to every issue - their own - I could not help but think about what Eric used to tell us, that in a world of "passionate certainty it is as important to retain the courage of one's doubts as the courage of one's convictions."

Eric was a wise man but never fooled himself into believing he had all the answers, and he never stopped the search to know more - which is, after all, the beginning of true wisdom.