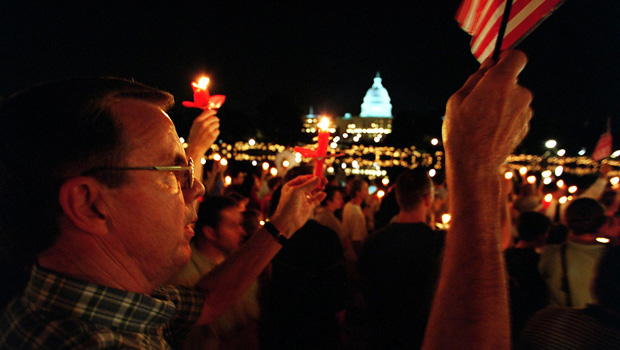 This week we mark the 13th anniversary of one of the worst days in American history -- the day we have come to know by two numbers: 9/11.

Memories of that day may have faded for some, but for those of us who were in the Northeast that day, it will never be forgotten.

All of us who were here seemed to know someone who died or lost a close relative.

My family was among the lucky. My brother had been in the Pentagon the day before the attack, in the very room where the plane hit. We lost contact for four hours with my younger daughter in New York, but she was eventually found safe.

I knew 11 people who died or lost close relatives that day, including a young colleague at CBS News who lost her Dad.

So forgive me if I feel a certain urgency about the current terror threat. Forgive me, but I've been through this before.

No, I can't forget the bad, but I also remember the good.

How an awful day brought Americans together as they had not come together since World War II . . . how road rage disappeared the next day, as people waved and honked. We had all gone through it together.

Most of all, I remember the heroic firefighters and police officers putting their lives at risk to save the innocent . . . and Congress putting aside partisanship (at least for a little while) and singing "God Bless America" that night on the Capitol steps.

In the end, it brought out the best in us, which hadn't happened in a while.

But it was a hard way to do it, and we owe it to each other never to let such a thing happen again.

Forgive me, but I've been through this before.

Some 9/11 families "outraged" over potential plea deals for defendants