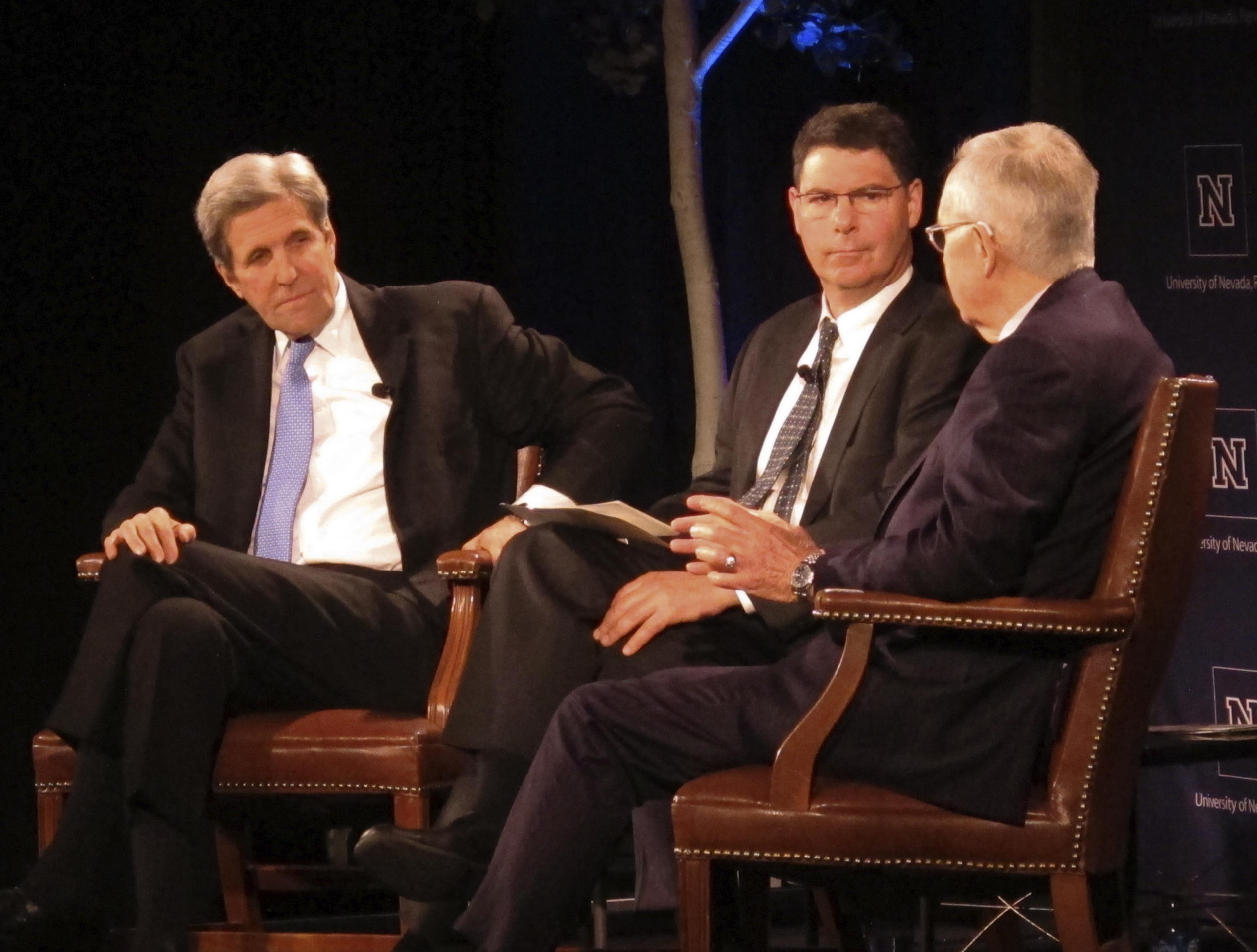 RENO, Nev. — Two retired Democrats who served in the U.S. Senate together for nearly three decades said Tuesday that money has been the driving force behind a dramatic rise in partisanship and resulting gridlock in Congress over the past decade.

"While money doesn't always get what it wants, it almost always gets gridlock instead," added ex-Secretary of State John Kerry. "And that's what we have today."

The two appeared together at the launch of a biennial lecture series at the University of Nevada, Reno named after Reid, who retired in 2016 as Nevada's longest serving U.S. senator. The inaugural topic was, "Bipartisanship and public service."

Both blamed Republicans for blocking efforts to enact enforceable limits on campaign contributions from corporations, political parties and other campaign committees. They said the gridlock often is by design, orchestrated by corporate and business interests that want to thwart federal regulation or equitable tax policies.

The Republican National Committee did not immediately respond to a phone call and email seeking comment Tuesday night.

Kerry, who first elected to the Senate from Massachusetts during President Ronald Reagan's landslide victory in 1984, and Reid, who first won his seat in 1986, recalled their earlier days in office when they said moderates in both parties worked cooperatively for the good of the country.

"Back then comprise was not capitulation. And no extremist held you accountable," said Kerry, whom President Obama named Secretary of State in 2013.

"Compromise was not a dirty word," Reid added. "Legislation is the art of compromise. I never ever got what I wanted. I always had to work with somebody else. That is something we've lost. Now it's, 'We do it my way, or no way.'"

Kerry, who lost the 2004 presidential election to Republican George W. Bush, said a long tradition of bipartisan cooperation began to disappear with the Republican "revolution" led by Georgia Rep. Newt Gingrich in 1994, followed by the evolution of the conservative Tea Party and more recently the GOP's "Freedom Caucus."

"Then came the hostile takeover of the Republican Party, which is where we are today," he said.

Kerry said the rules of the Senate remain virtually unchanged over the past century.

"It's not the rules of the Senate that get in the way, it's the people that get in the way — individuals who decide their extreme ideological view is more worth fighting for even if they get nothing" than to compromise and do what's best for the United States, he said.

Reid said in an interview before the lecture many mistakenly blame President Trump for the erosion of bipartisanship.

"Prior to Obama, there was partisanship, of course, but Obama drove Republicans crazy," Reid said.

"They always thought he was an illegitimate president and they set out to do two things," he said. "They would do anything they could to defeat Obama during his re-election, which they failed to do. And No. 2, they would oppose everything Obama wanted. They succeeded there."

"They have done all they can to affect the ability of the Senate to get anything done and they've refused to do anything about campaign spending," he said. "Filibusters were rarely used in the past, but Republicans use them now even on things they agree about just to stall for time."