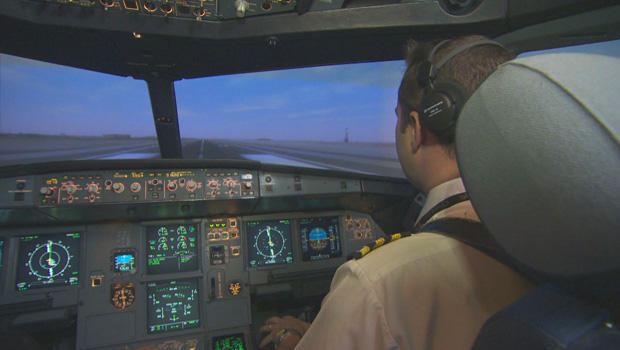 The words CLEARED FOR TAKEOFF are welcomed by air travelers in a hurry. They're even more welcomed by airline pilots who once feared they'd never fly again. Our Cover Story is reported by Tony Dokoupil:

Many alcoholics can tell you the exact moment they hit rock bottom. Former airline Captain Lyle Prouse hit his at 30,000 feet.

On March 8, 1990, he was at the controls of Northwest Flight 650, Fargo to Minneapolis, with 58 people aboard, and after a night of heavy drinking on a layover, he was drunk.

His blood-alcohol content that morning was at least 0.13 percent: Too drunk to drive, and more than triple the limit for flying.

Dokoupil asked, "Did you have any doubts about getting on that plane?"

"No. I mean, I wouldn't fly the airplane if I thought I was gonna die."

The plane landed safely, but Prouse and his crew were arrested, and became the first commercial airline pilots convicted of flying while intoxicated. Prouse was sentenced to 16 months in federal prison.

"No other pilot in all of American commercial aviation damaged the profession like I did," he said. "That was a knife in my heart. That hurt."

Lyle Prouse's career was a longshot from Day One: Raised by alcoholic parents, he joined the Marines and fought his way from a ground unit into a fighter jet, and a decorated career. Somewhere along the way, though, he became an alcoholic himself.

"Our pilots are just like all people; they have some of the same shortcomings that any of us could have," said Peggy Gilligan, the former FAA administrator in charge of safety. She says a drinking problem is not necessarily the end of a pilot's career.

"There are lots of things that initially might disqualify you from being a pilot, but with proper care and treatment, with proper rehabilitation, you can return to the flight deck," she said.

And in fact, for decades, the FAA has been doing exactly that: quietly sending pilots diagnosed as substance abusers back to work.

It's called the Human Intervention Motivation Study, or HIMS. And before you panic, consider this: it may be one of the most successful rehab programs ever.

Eighty percent of pilots who enter the program do not relapse at all. And of those that do relapse, most relapse only once.

Dokoupil asked, "There's never been an issue with a pilot undergoing treatment while flying?"

"Why aren't you screaming this good news from every rooftop in Washington, D.C.?"

Right now, under the HIMS program, there are upwards of 1,300 pilots flying with a special medical license for addiction.

Since the mid-1970s, 6,000 pilots have been treated and returned to the cockpit … pilots like Captain Dana Archibald, whose career nearly crashed in the late 1990s when he missed a flight after a drunken binge.

"I just stopped showing up for work," he said.

"You're just telling your boss that you got the flu?" asked Dokoupil.

"I would tell him every story in the book, because I'm an alcoholic. I'd tell 'em anything they wanted to hear, just so I wouldn't get in trouble."

In another era, addicted pilots would be fired or forced to keep their addictions a secret. The FAA says that's all changed.

"What we don't want, to this day, are pilots who hide something that could present a risk," Gilligan said.

Of course, addiction isn't just a pilot's problem; millions of Americans are struggling with addiction. Most of the people who need treatment are not in it, and relapse is common. But for airline pilots, those rules don't seem to apply.

Dr. Lynn Hankes, who ran an addiction treatment center in South Miami. He says the airline pilots he treated were more likely to get sober, and stay that way.

A member of the general public, he notes, is three times more likely to have a relapse than a pilot.

Why? "Because they don't have the system in place," Dr. Hankes said.

For pilots, that system means a month or so in an FAA-approved rehab facility, then monitoring and drug tests. And if the FAA clears them to fly again, the treatment usually continues for at least three years.

It's not foolproof, but it works.

"Since the inception of the HIMS program, in the last 43 years there has never been even one, not a single commercial passenger-carrying airline incident or accident, that has been alcohol- or drug-related," Dr. Hankes said. "That's the proof in the pudding."

"If the general public had a HIMS-style program available to them, do you think relapse rates would fall as low as they are for pilots?" Dokoupil asked.

"Well, that's the big question. There's a key element missing in the general public, and that is, we don't have the leverage."

"Everybody is afraid of losing something."

"Yeah, but it's very easy to hide out there in the general public.  If you threaten a pilot with taking away his wings, it's like threatening a doctor with taking away his stethoscope. That's a lot of leverage. If they want to get back to the cockpit or the operating room, they gotta jump through the hoops."

And jump they do: Similar programs have been used successfully by doctors and flight attendants, and now police and fire departments are interested, too.

For pilots, it's about a lot more than just winning back their wings.

Dana Archibald told Dokoupil that, were it not for the HIMS program, "I certainly wouldn't be a pilot, but more importantly, I don't know if I'd be alive."

Archibald is now a full-time 737 captain with a major airline flying out of Miami.

And the Lyle Prouse story ends far differently than he ever could have hoped. After his arrest, he was a broken man on the verge of suicide.

"I lost the will to live," he said. "And I thought I was too tough for that."

"How close do you think you came to taking your own life?" Dokoupil asked.

But after he got out of prison, he was placed into the HIMS program, and in 1993 -- against all odds -- he was re-hired by Northwest Airlines.

Five years later, Prouse retired honorably as the captain of a 747.

"I've gotten to live out more miracles than anybody I know," he said.

What are the miracles?  "That I flew again. That my wife stayed with me. That my kids still love me. That I got sober. That I didn't die like my parents did.

"I just came back from a pilot reunion at Northwest. And I get an email from one of the gals. She said, 'You're a very loved and respected member of the Northwest Family.' I didn't have that in 1990."

Prouse added, "I suppose without sounding preachy or evangelistic, the only thing I can attribute it to is God's grace."

"'Fools and drunks'? Something like that. Well, I certainly earned that!"