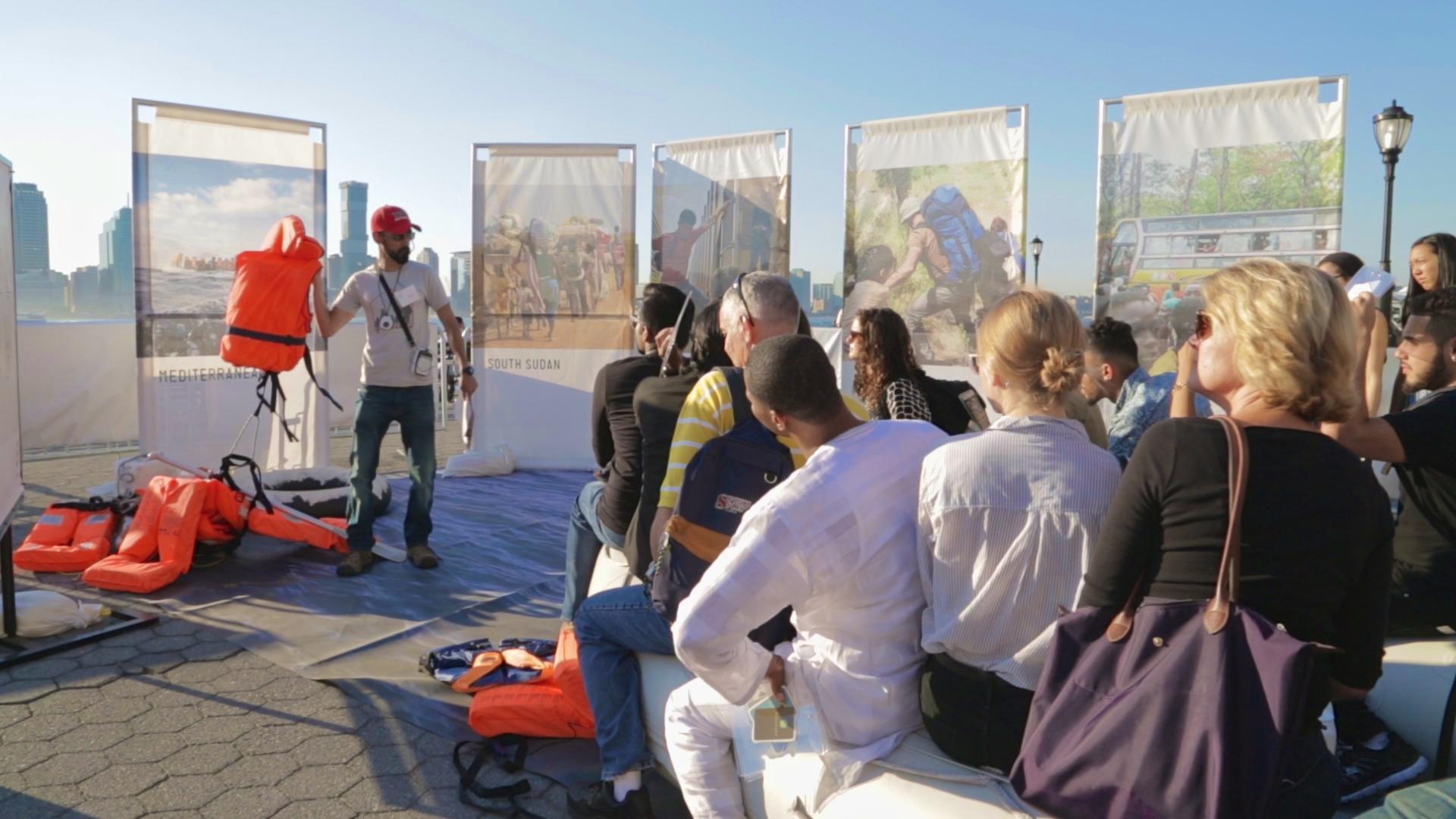 NEW YORK  Imagine having to run from your home with just a few belongings. A small boat might be your only escape to safety and a crowded tent might become your only shelter. This is the reality for more than 65 million refugees and internally displaced people around the world.

Doctors Without Borders, also known by its French name Medecins Sans Frontières (MSF), is trying to help people better understand this reality through an interactive exhibit called Forced From Home.

Leading these tours are MSF aid workers who speak about their experiences on the ground and the struggles of being forced from home. It’s something Ahmed Abdalrazag knows all too well.

The 33-year-old worked as a general physician and medical team leader for MSF in Tunisia in the same camp where he was a refugee. He fled Iraq with his family when was 14 and ended up jumping around from country to country – Jordan, Egypt, Libya and eventually Tunisia.

CBS News met Abdalrazag while he was giving tours in New York, where the exhibit started.

“I am here to help to raise the awareness for the public for the humanitarian crisis that we are facing globally,” he said.

He said people in his tours are surprised to learn that he is a refugee. Abdalrazag thinks it’s important that people hear his story both as a refugee and as an aid worker, “Refugee can be anyone. [We] come from different background[s].”

Abdalrazag is one of nearly 34,000 people working for MSF, many of whom are locally hired and have been through similar hardships.

“It’s not uncommon for us to have staff who are living through the trauma of having to flee their home, while at the same time helping their communities, the very communities that they have fled,” said Jason Cone, executive director for Doctors Without Borders.

Cone, who describes the current refugee crisis as the worst since World War II, believes it’s particularly important for Americans to see this kind of exhibit because it’s easy for people in this country to feel like the crisis is far away and difficult to relate to. “With this exhibit, we’re trying to close that distance, so people can understand, they’re put in the shoes of someone who has to flee their home,” he said.

At the end of August, the White House announced that the U.S. had reached a goal of admitting 10,000 Syrian refugees. But that’s just a small fraction of the millions displaced since the war there began. Other countries like Turkey, meanwhile, have taken in more than 2.5 million Syrians.

The Obama administration said it will admit 110,000 refugees from around the world in the 2017 fiscal year – a commitment that continues to stir political controversy.

For many refugees, the conditions of where they end up are difficult and their journeys are filled with physical and psychological pain and loss.

“You are losing your life. Your life is in this vicious cycle of waiting and you have no status, no one approving who you are, and you are seeking a place to settle down to start your life,” said Abdalrazag, who is now officially settled in Michigan.

Visitors get a glimpse into what this struggle is like at the beginning of the hourlong tour when they are asked to pick just five items to take with them. Along the way at different stations they end up having to give up their items one by one.

At the end of the tour, visitors can put on virtual reality headsets and immerse themselves in the stories of refugees from countries like Iraq, Tanzania and Mexico.

“You’re sitting in a camp, you’re walking the streets, you’re inside a home, you’re looking at children and families and it’s an experience that you really won’t be able to have in person,” said 21-year-old Denise Torres, who said the virtual reality display was her favorite part of the exhibit.

The exhibit is currently in Washington D.C. and will also make stops in Boston and Pennsylvania.

Abdalrazag will be working some of those tours and said he hopes it will give people a deeper understanding of what it’s like to be forced from home.