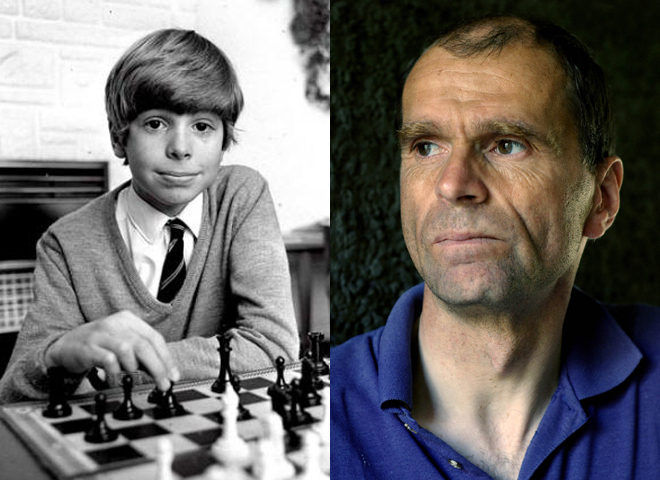 (CBS News) Imagine your real life experiences from the age of seven made into a series of documentaries. For a group of people in Britain there is no imagining -- they've been watching their lives unfold on the screen for half-a-century, with the latest installment scheduled to run on PBS on October 14th. Their personal stories are our Cover Story, reported by Lee Cowan:

An earlier version of this story was originally broadcast on January 6, 2013.

It looks like any other group of kids in the early 1960s, but it wasn't just a dance party. It was a sociological experiment for a British documentary called "Seven Up!"

The idea was to gather 7-year-olds from widely different backgrounds, and look at Britain's class system through their eyes.

At one end of the extreme: Upper-class seven-year-olds, like the trio of John, Andrew and Charles attending a boarding school.

John: "I read the Financial Times."
Andrew: "I read the Observer and the Times."
Charles: "What do you like about it?"
John: "Well, I usually look at the headlines, and then read about them."

At the other end of the spectrum: seven-year-olds who were less privileged, like those growing up in a charity group home.

Interviewer: "What do you think about rich people?"
Symon: "Well, not much."

After it first aired in 1964, the boys and girls -- 14 of them in all -- became mini-celebrities for their infectious wit and charm.

Interviewer: "What do you think of girlfriends at your age?"
Andrew: "I've got one, but I don't think much of her!"

The man who plucked them from obscurity all those years ago was Michael Apted, a 22-year-old researcher on the project.

"It was very funny, the original one, but it was also alarming," Apted told Cowan. "You could see that people's views of the world were totally determined by where they were coming from. And those who had somewhat impoverished backgrounds had a very narrow view of the world, and those who were in power had this grand view, not just of the world, but of their lives."

He was so struck by what they said that he vowed to track the same group down every seven years ever since. The latest installment, "56 Up," is the continuation of a series that the late critic Roger Ebert called one of the best films of all time.

Cowan asked, what is it that makes this so compelling?

"Well, 'cause I think people identify with it," Apted replied. "You see 13, 14 stories up there, and there's elements in some of them that hit home on every life. Everybody who watches it can identify with something."

Suzy is one of his favorites. When she was seven, the series pried into her thoughts on boys. Over the years Apted kept asking:

Now at 56, Suzy is still married to Rupert, with two grown sons and a daughter.

"There are great moments in the film, aren't there, when you cut from one generation to another, and it's night and day," said Apted.

In-between those seven-year intervals, Apted's been busy making other movies -- blockbuster movies. He directed Sissy Spacek in her Academy Award-winning performance in "Coal Miner's Daughter." He directed "Gorillas in the Mist," too -- nominated for five Oscars. He even did a James Bond film, "The World Is Not Enough."

But it's these relatively small-budget, seven-year retrospectives that Apted considers his life's work -- and tough work it is.

Not all those little lives went the way you'd think, or hoped. Take Neil, for example.

By the time Neil was 14 he was planning for college, but by 21 he had dropped out and was working on a construction site.

When Apted found him at 28, Neil was homeless, wandering the English countryside. Apted was sympathetic, but he pressed ahead with sometimes piercing questions.

Interviewer: "Do you worry about your sanity?"
Neil at 28: "Umm . . . other people sometimes worry about it."

"It's very tough," Apted told Cowan. "Sometimes I've asked questions, and I've watched the film with an audience and the audience gasps, and I think, oh my God, sometimes I think I may have gone too far."

In the end though, Neil found his footing. By 42, he ran and was elected to his town's council. By 56, he had even become a lay minister in his church.

But having his life's stumbles exposed hasn't been easy for him, or any of the "Up" series participants.

Interviewer: "Do you have a girlfriend?"
Nick at 7: "I don't want to answer that, I don't answer those kinds of questions."

Form the start Nick was a bit reluctant. At 14 he didn't even look at the camera. By 21, he questioned Apted on camera about the series as a whole" "It's just that the limitations of such things as what the audience requires, and the time, don't allow it to be a real study."

Still, Nick has never backed out. Over the years we've watched his move from a rural farm in the U.K. here to the U.S., becoming a professor at the University of Wisconsin. He got married, had a son, got divorced, and got married again.

"I mean, he's not deliberately setting out to be mean to us," Nick told Cowan. "But you know, making good TV is absolutely his top priority."

"Have you told Michael how painful it is?"

But, he says, the pain is worth it. Does he regret doing it? "No, I don't. I mean, it's interesting. I mean, you know, it would be kind of pathetic to opt out of it. Even if it's painful, it's interesting and it's important."

Not all of them dislike the process. Little Tony Walker seemed to relish it.

He was a rough-neck kid from London's East End, who did indeed become a jockey. But by 28 he had traded his horse for a London cab, which is where we found him.

"I'm very lucky to have that documentation of my life," Tony told us.

Tony at 42: "I've had regretful behavior at various times."
Wife: "You got caught and that was it."

"My wife wasn't very happy in the fact that, you know, it came out," Tony said. "And I was wrong. But my wife and I are now real strong again."

Apted says he'll keep the series going as long as everyone is willing, and healthy. The thought of anyone dying, he says, is too much to bear.

His goal: to keep it going until his film family are in their 80s. Apted will by then be nearly 100.

This week on "Sunday Morning" (August 22)