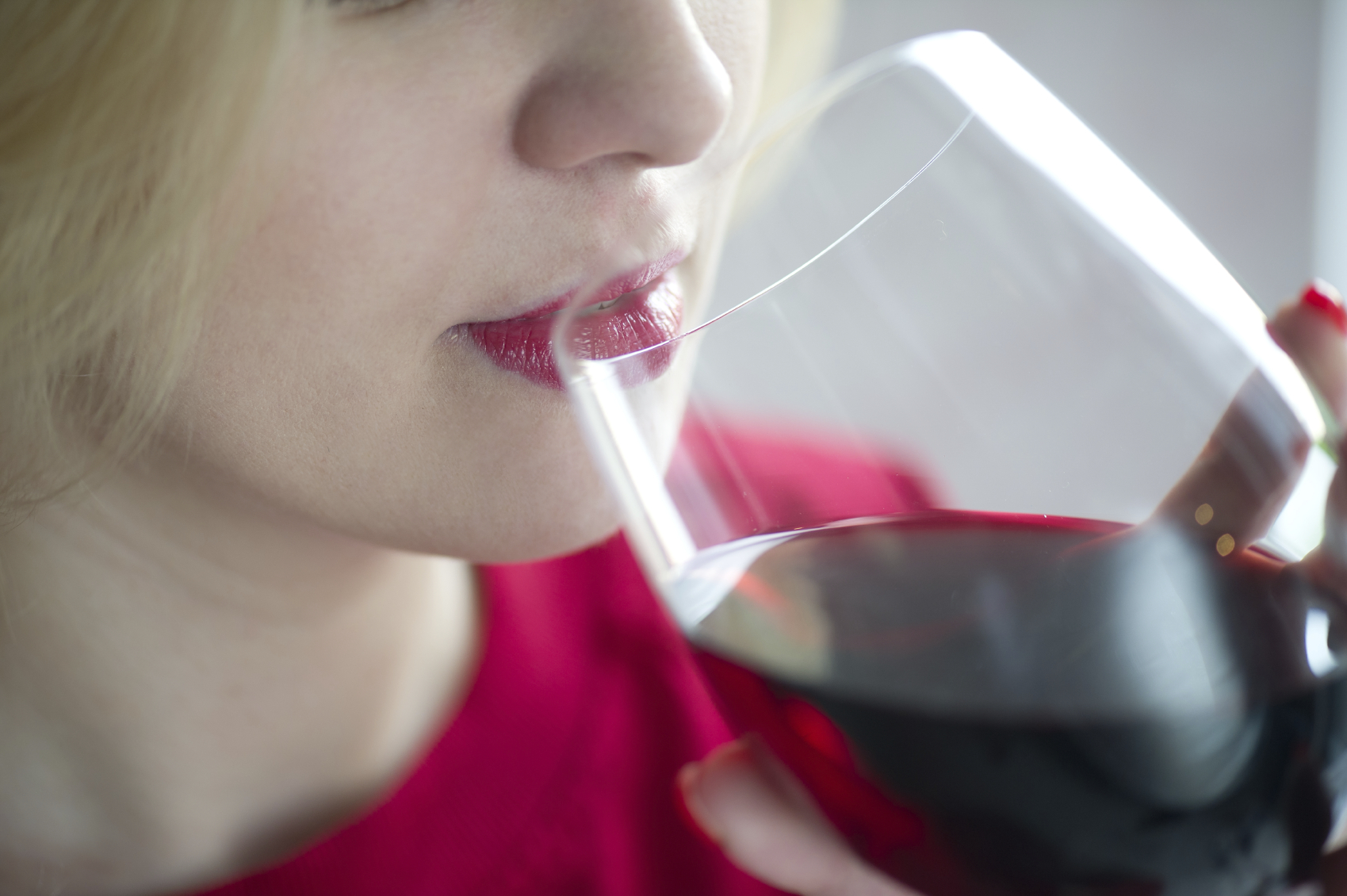 A glass of red wine each evening with dinner may offer heart health perks to people with type 2 diabetes.

A two-year study published in the Annals of Internal Medicine is the first long-term study aimed at assessing the effects and safety of drinking moderate amounts of alcohol in people with type 2 diabetes, who are more at risk for developing cardiovascular disease than the general population. Those with type 2 diabetes also tend to have lower levels of HDL, the "good" cholesterol.

The researchers from Ben-Gurion University of the Negev reported that over two years, red wine helped improve signs of cardiac health by modestly increasing levels of HDL cholesterol and lowering overall cholesterol.

The randomized controlled intervention trial involved 224 controlled diabetes patients aged 45 to 75, who generally abstained from alcohol. The patients were randomly assigned to drink 5 ounces of red wine, white wine, or mineral water (the control group) with their dinner for two years. They were all given instructions to follow a well-balanced Mediterranean diet plan that did not have a calorie restriction.

The researchers performed genetic tests that showed how quickly the patients metabolized alcohol, as well as various lipid (cholesterol) tests. They also measured glucose control, blood pressure, liver function tests, medication use, and other symptoms at several time points during the two-year follow-up.

Also, in both wine groups, patients who were "slow alcohol metabolizers" (according to the genetic tests) showed more improvements in glucose control tests than "fast alcohol metabolizers." Compared with water, wine did not increase or decrease blood pressure or liver function tests.

The study authors noted that in both red and white wine drinkers, sleep quality was significantly improved, too, compared with the water control group.

Iris Shai, principal investigator of the trial, and a member of the Department of Public Health in the Faculty of Health Sciences, said in a press statement, "The differences found between red and white wine were opposed to our original hypothesis that the beneficial effects of wine are mediated predominantly by the alcohol."

So, how much can people with type 2 diabetes sip at dinner without going over the top? "One to two glasses of red wine for men and up to one glass of red wine for women, daily, at dinner," was the amount indicated by the study, Dr. Minisha Sood, an endocrinologist at Lenox Hill Hospital, told CBS News.

Sood said researchers have known for some time that moderate amounts of alcohol are acceptable for diabetics, but the jury was out on which kind of alcohol might offer the most benefit.

Sood said of red wine's health-enhancing ingredients: "It's the non-ethanol components of the wine, which are present more so in red wine. It's the phenols, it's the resveratrol, it's the tannins. They all work together with the ethanol possibly to result in these positive changes."

While the study shows benefits, Dr. Susan Spratt, an endocrinologist and assistant professor of medicine at Duke University School of Medicine, said, "I worry about the subset of my type 2 diabetes patients who drink too much, and that this may give them more ammunition to say alcohol is good for diabetes. Over-drinking can poison the pancreas. In these patients, when they stop drinking, their diabetes gets tremendously better."

Spratt also told CBS News that in the South, where she lives, many people abstain from drinking for religious reasons. She said, "Here in the South, it would not be something I would generally recommend. I would not say, 'Now you should start drinking wine.' I wouldn't tell someone to start drinking, but if I knew a type 2 diabetes patient was a moderate drinker, I would tell them it looks like red wine is the best choice out of all alcohols to drink, rather than white wine, beer, or hard liquor."

Spratt also noted that the study did not look at cardiovascular outcomes such as heart attack and stroke.

For 51-year-old Garret Rubin, who said he has to watch out for everything -- fats, salt, sugar -- in his diet since being diagnosed with type 2 diabetes, the study is a positive note.

Rubin said diet, exercise and medication will remain his first line of defense, but he told CBS News, "Now, since I have a choice, I think red wine might be the thing."

Editor's note: In an earlier version of this article, Dr. Sood said red wine decreased development of heart disease, but that was not found in the study. The research only looked at risk factors like cholesterol levels, not whether patients actually developed heart disease.