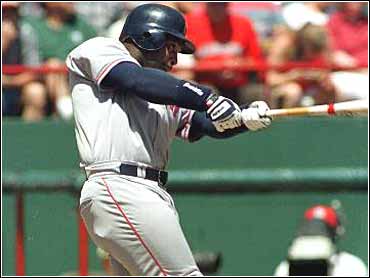 The bottom seven hitters in the lineup made things easy for the Boston Red Sox.

Texas Rangers starter Mike Clark (2-2) retired the first two batters Wednesday, but the next seven Red Sox hitters reached as part of a five-run outburst in the first inning.

Boston didn't stop there, as the Red Sox routed the Rangers 14-4.

"We don't ever look at the scoreboard, this team just plays hard for nine innings," said Brian Daubach, whose two-out double started the biggest-scoring first inning by Boston this season.

Daubach had four hits, including a career-high three doubles, to lead the Red Sox. Each of the bottom seven hitters in the Red Sox lineup had at least two hits, and combined for 20 of Boston's season-high 21 hits.

Nomar Garciaparra extended his hitting streak to 13 games with three hits, including an RBI double that sent Daubach home with the first run and a solo homer in the fourth.

With his second 3-for-5 game in the series plus an intentional walk with Boston leading by six runs, Garciaparra was 8-for-14 in the three games against Texas. He is 25-for-48 (.521) against the Rangers since the start of last season.

When asked about his success against the Rangers and his current hitting streak, Garciaparra insisted he wasn't very aware of it. As for the team's performance, he said everybody just fed off each other.

"I don't think anybody likes to make an out on this team," Garciaparra said. "Everybody hustles and plays hard. Everybody sees that within each other, and we do't count on one guy. We count on everybody, and everybody realizes that."

After consecutive first-inning doubles by Daubach and Garciaparra and a walk, Carl Everett hit a three-run homer. No. 9 hitter Wilton Veras later added an RBI single.

Boston starter Jeff Fassero (2-1) was the benefactor as the Red Sox scored in each of the first four innings to build a 9-0 lead.

"They made it easy to go out and pitch," Fassero said. "I just had to go out there and throw strikes, make those guys hit the ball and hope that it was at people."

Fassero didn't allow a run until David Segui doubled and scored on a fielder's choice grounder in the fourth for Texas.

Fassero was pulled after Segui led off the sixth with a sharp single to left. Fassero allowed three runs on seven hits, three of them by Segui, with two strikeouts and two walks.

Clark left after giving up a one-out RBI single to Troy O'Leary in the second. He gave up six runs on seven hits in the shortest outing by a Rangers starter this season.

"It was one of those days you don't like to have," Clark said. "Every pitch I got up in the zone was hit. I felt good coming out, but I just missed some spots. When you're struggling, they hit everything."

Texas finished its homestand 2-7 after being swept by the Yankees and losing two-of-three to both Minnesota and Boston.

"Attitude and mental state are two totally different things," Texas manager Johnny Oates said. "When you go out and you've been struggling, that's not an attitude."

Jason Varitek hit the first pitch of the third inning for his second homer of the season. Garciaparra hit his homer an inning later when another run also scored on a Texas error.

Everett's third hit was an RBI double as the Red Sox added four more runs in the ninth off Tim Crabtree, the sixth Texas pitcher.

Ivan Rodriguez hit a two-run homer, his seventh, in the fifth for Texas. Tom Evans added an RBI single in the ninth.