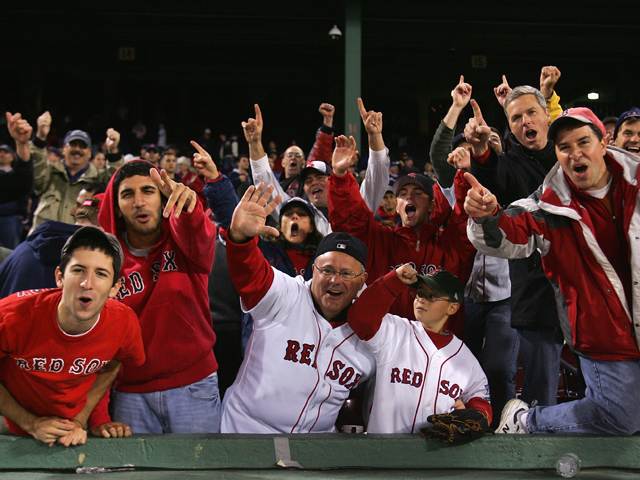 It's time for another dubious "scientific" analysis of baseball fans.

You might recall that this year Philadelphia Phillies fans have already been anointed "meanest" (GQ magazine) and "most loyal" (Facebook).

Now, Bundle has crunched their own numbers to definitively tag the team with the most "obsessed" fans. Their conclusion: the Boston Red Sox.

As is always the case with these "most (insert adjective)" fan rankings, the money management website uses a questionable algorithm, incorporating a methodology as coherent as a Cosby sweater.

"To figure out which baseball teams have the biggest fans, we looked at fan attendance for home games in 2010, revenue generated last year by each team, and fan obsession with Fantasy Baseball by city," the website says.

But there's more madness to the method: The Bundle money crunchers also looked at their database to see which teams' fans spent the most cash at restaurants and bars. Presumably this scientific variable assumes that folks only seek food and liquor at a sports bar but we'll leave that wild assumption alone.

With all those dollars tallied, Boston emerges as having "the biggest fans in baseball" while the San Francisco Giants rank second. Rounding out the top ten: the Cubs, Cardinals, Yankees, Twins, Phillies, Mets, White Sox and Angels.

It seems strange to equate average dining expenses (where the Washington Nationals rank No. 1, by the way) with fantasy baseball obsession (St. Louis wins that category) - but hey, people like lists.

Maybe there is something to Bundle's methodology. After all, the two most obsessed fan groups in major league baseball (according to their analysis) are conspiring to rig the All-Star Game next month. Obsession, indeed.