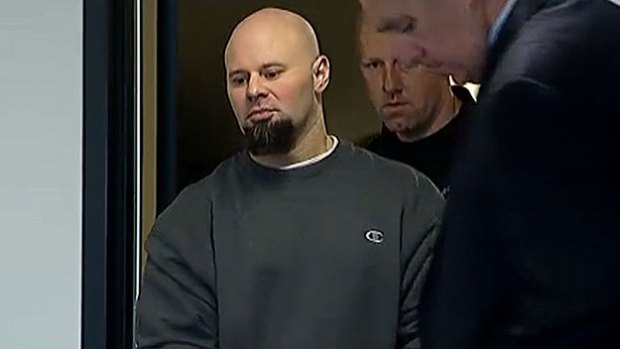 WOBURN, Mass. - The son of longtime Boston Red Sox broadcaster Jerry Remy pleaded guilty to murder and other charges for stabbing his girlfriend last year and attacking people who tried to help her, and was immediately given the mandatory sentence of life in prison without parole.

Jared Remy, 35, admitted in Middlesex Superior Court Tuesday that he fatally stabbed 27-year-old Jennifer Martel in August. He described himself as "the bad apple" and called Martel "an angel" but said that he killed her one night because she had a knife and was threatening him.

Remy pleaded guilty to first-degree murder, assault and battery, and violating a restraining order, among other charges. His father, a former Red Sox second baseman who has been a color analyst on team broadcasts on the New England Sports Network since 1988, was not in court for the hearing.

Prosecutors described how Jared Remy repeatedly stabbed Martel August 15, first in the couple's Waltham apartment as their 4-year-old daughter screamed, and then as she crawled to an outside patio. Three neighbors tried unsuccessfully to pull Remy off Martel.

Before sentencing Remy, Judge Kathe Tuttman asked him if he disputed prosecutors' account of the stabbing.

"She had a knife in her hand. She was threatening me about my daughter," Remy told the judge in a calm voice.

"Blame me for this, not my family," Remy told the court, according to CBS Boston.

"My family did everything they could to help Jen," Remy said, adding that he was a "bad apple" and that his family would rather have him dead than Martel.

He said he wanted to "take responsibility" for what he had done, reports the station.

"Jen helped me clean up my act but there was one thing I never stopped doing; that was my love for drugs. And I'm sorry for that," he said.

Also prior to the sentencing, victim impact statements were read. The first was from a friend of Martel's who witnessed the murder, according to the station.

Martel's parents also submitted a statement, which was read by their attorney, Alec Zadek.

"We miss her phone calls," the statement read. "Our granddaughter will grow up without a mother."

Martel's brother, Brian, gave the final statement, saying, "We have taken in Jennifer's daughter, we try to assure her that she is safe."

Remy had been arrested on Aug. 13, two days prior to the fatal stabbing, after he allegedly pushed Martel into a mirror. He was released on his own recognizance on Aug. 14 and fatally stabbed Martel the next day.

The case prompted questions about whether Remy's violent history had been overlooked by the criminal justice system. It led state lawmakers to propose an overhaul of the state's domestic violence laws, including new bail guidelines and tougher penalties for abusers.

Since Remy has been in jail, he has been accused of attacking another inmate, throwing hot coffee in his face, hitting him with a plastic chair and punching him. He is a former Red Sox security staffer who was fired by the team in 2008 during a steroid investigation.

CBS Boston reports Jerry Remy's attorney, Ed Ryan, said after the hearing Tuesday that Jerry Remy was not in court for the hearing at Jared Remy's request.