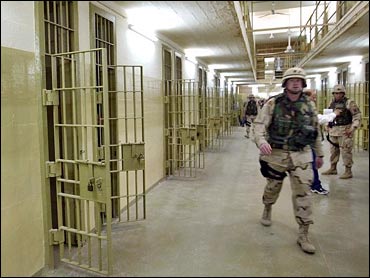 The international Red Cross said Thursday it had repeatedly asked U.S. authorities to take action over prisoner abuse at Iraq's Abu Ghraib prison and that American officials reacted positively before recent revelations about the way detainees were treated.

Meanwhile, a newspaper said it had obtained more pictures possibly depicting abuse at the prison.

The ICRC, which visits prisoners held by coalition authorities in Iraq, had previously refused to comment publicly on conditions at the prison or say whether it had discussed allegations of prisoner abuse with U.S. officials.

"We were aware of what was going on, and based on our findings we have repeatedly requested the U.S. authorities to take corrective action," Doumani said.

The Washington Post, in its Thursday editions, said it had obtained a new batch of more than 1,000 digital photos from Iraq. The newspaper said the photos ranged from snapshots depicting everyday military life to graphic images of what appeared to be a female soldier holding a leash that goes around a naked man's neck at Abu Ghraib prison. Friends and relatives of the soldier with the leash said the photo must have been staged, the Post said.

Defense Secretary Donald Rumsfeld was summoned by angry lawmakers to testify on Capitol Hill on Friday, while senators — Republicans and Democrats alike — discussed a resolution to condemn the abuses.

President Bush on Wednesday tried to calm the anger of the Arab world over the abuse of prisoners in Iraq, promising that justice would be served. White House aides said he had chastised Rumsfeld for failing to tell him about pictures of prisoner mistreatment.

Mr. Bush went on Arab TV and said Americans were appalled by the abuse and deaths of Iraqi prisoners at the hands of U.S. soldiers. He promised that "justice will be delivered."

"The people in the Middle East must understand that this was horrible," Mr. Bush said. He appeared on two Arabic-language television networks to take control of the administration's damage-control efforts.

While Mr. Bush did not offer an apology, Condoleezza Rice, his national security adviser, had said Tuesday that "we are deeply sorry for what has happened.

The difficulty of Mr. Bush's task became clear in the first question of an interviewer who said the evidence of torture made many Arabs believe that the United States was no better than Saddam Hussein's government, notorious for torture and murder. The president murmured under his breath at the comparison.

Mr. Bush said the abuses were "terrible" for America's image abroad. "I think people in the Middle East who want to dislike America will use this as an excuse to remind people about their dislike," he told Al-Arabiya television, a satellite channel based in Dubai, United Arab Emirates, that is popular around the Arab world.

Mr. Bush said he retained confidence in Rumsfeld. However, White House aides said Mr. Bush let Rumsfeld know in recent days he was "not satisfied" with the way he was informed about the unfolding scandal. In particular, Mr. Bush was unhappy about learning of the pictures only when they were broadcast, and not before, said the aides, who spoke only on condition they not be identified by name.

In Iraq, the new general in charge of prisons there apologized for the mistreatment of detainees at Abu Ghraib prison, and troops launched a new offensive against the followers of a rebel cleric.

"These are violations not only of our national policy but of how we conduct ourselves as members of the international community," Maj. Gen. Geoffrey Miller said.

According to an Army investigation that found evidence of "sadistic, blatant and wanton criminal abuses" at Abu Ghraib, Miller conducted a review of U.S.-run prisons in Iraq last fall. In it, Miller said prison guards should create conditions favorable for interrogations. The Army investigation found that guards at Abu Ghraib were doing so.

Reaction in the region to Mr. Bush's remarks was generally skeptical.

"The president of the United States needs to offer the world an explanation and needs to take appropriate responsibility," Kerry said. "And if that includes apologizing for the behavior of those soldiers and what happened, they ought to do that."