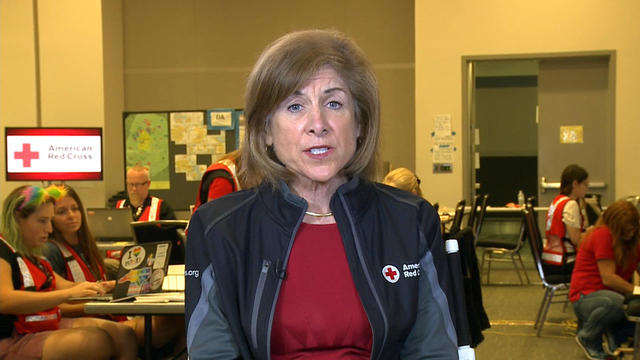 As the federally-designated co-lead for mass care during disasters, the American Red Cross is tasked with providing shelters, food, and emergency supplies. Amid the flooding from Hurricane Harvey, it has helped put more than 32,000 people in shelters and served more than 180,000 meals and snacks since the storm began.

However, some are urging people on social media not to donate to the Red Cross, citing concerns about how the organization spends its funds. The Red Cross was criticized in 2013 for still not having spent more than a third of the money it raised seven months after Superstorm Sandy.

"We are going to make sure that every designated dollar that is going to this storm is used appropriately," said Gail McGovern, president and CEO of the American Red Cross, on "CBS This Morning" Thursday.

The Red Cross currently has more than 1,500 volunteers on the ground in Texas. McGovern says they're using high-water vehicles from the Defense Department to get supplies to evacuees in shelters that were overwhelmed in the first days after the storm.

"The need is enormous and we've had an outpouring of support and a lot of people that are interested in volunteering," McGovern said. "The challenges have been incredible. Just getting supplies in when all these roads have been flooding have been unbelievable."

Asked what portion of the money people donate will actually go to Harvey victims, she said, "On average, 91 cents of every dollar" goes to Red Cross services. She defined Red Cross services as things like food, supplies and cleanup kits.

McGovern was unable to say how much money has been raised for Harvey relief so far or what the need will be.

"In terms of what we have raised, it's literally changing by the hour," she said. "Sometime next week we'll be able to give you a good idea of how much money we've raised because it's changing very rapidly."

"I know how these gifts are given. I understand the generosity of the American public. The need is so great and people just always step up for us and we take that responsibility very, very seriously," McGovern said.