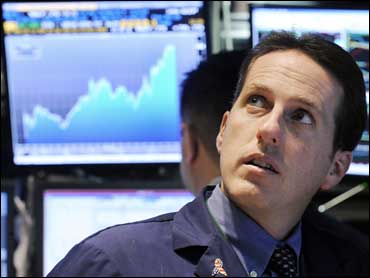 Wall Street stormed back after its worst week ever and staged the biggest single-day stock rally since the Great Depression on Monday, catapulting the Dow Jones industrials to a 936-point gain and finally offering relief from eight consecutive days of stock market carnage.

While no one was saying the worst was over for the staggering financial system or troubled economy, buyers returned to the stock market with gusto, with some saying stocks had been driven down to fire-sale prices.

The surge came as executives from leading banks were summoned by the Bush administration to Washington to work out a plan to get loans, the lifeblood of the economy, moving again. And it followed signals that European governments would put nearly $2 trillion on the line to protect their own banks.

The Dow gained more than 11 percent. It was the biggest single daily percentage gain in 75 years - although the Dow is still down 13 percent this month, reports CBS News correspondent Anthony Mason.

By points it shattered the previous record for a one-day gain of 499, during the waning days of the technology boom in 2000.

"My screen is completely green, and I love that," said John Lynch, chief market analyst for Evergreen Investments in Charlotte, N.C. "But I'm not doing any backflips yet. We still have many challenges up ahead."

Stocks opened sharply higher and never looked back. The Dow was up more than 400 points in the opening minutes of trading, and by lunch hour had crossed back through the same 9,000 level it crashed below last week.

The rally intensified in the final hour of trading. In the moments before the closing bell rang, boisterous traders sounded horns on the floor of the New York Stock Exchange, and raucous applause broke out.

"I would say this is closer to the bottom. I can't say this is the bottom," said Bill Schultz, chief investment officer at McQueen, Ball & Associates in Bethlehem, Pa. "I think it's more relief, the rally today."

For Wall Street, it came not a moment too soon. The dismal week before wiped out about $2.4 trillion in shareholder wealth. The eight-day losing streak drained 2,400 points from the Dow, or 22 percent - roughly equal to the 1987 crash and enough to establish a bear market all on its own.

The massive rebound also pushed the Nasdaq composite index higher by 195 points, or nearly 12 percent, its second-biggest gain in percentage terms. The Standard and Poor's 500, rose 104 points, its biggest point gain ever and an 11.5 percent gain, its greatest since 1933.

About 3,030 stocks advanced on the New York Stock Exchange, while only about 160 declined - a reversal from last week, when declining stocks overwhelmed the gainers. But the trading volume of 1.82 billion shares was lighter than it had been last week, suggesting there was less conviction in the buying than during last week's selling.

At the close, the Dow stood at 9,387.61. That's still a far cry from its peak of 14,165, set a little more than a year ago - and history suggests Wall Street could have a long climb back to the top of the mountain.

After the Black Monday crash of October 1987, it took the Dow until August 1989 to set a new all-time closing high, almost two years after its previous peak. The 1987 crash took stocks down 36 percent from their pick - comparable to the 40 percent decline in this round of turmoil.

The Bush administration said it was moving quickly to implement its financial rescue package, including consulting with law firms about the mechanics of buying ownership shares in a broad number of banks to help get lending going again.

The $700 billion package, approved by Congress this month, already gives Treasury Secretary Paulson the authority to buy bank stock, which can be done in days - far more quickly than buying up the bank's toxic mortgage loans, which will take weeks, reports Mason.

Neel Kashkari, the assistant Treasury secretary in charge of the program, said Monday officials were also developing guidelines to govern the purchase of soured mortgage-related assets. He gave few details about how the program will actually buy bad assets and bank stock.

And Wall Street still has a lot to worry about, including a housing market that is still groping for a low point in prices and shoppers who are spooked by job losses and other ominous economic signs and are cutting back on their spending.

"I think we had enough negatives last week that if the government steps in we could have a pretty nice run," said Denis Amato, chief investment officer at Ancora Advisors. "Is it off to the races? No, I don't think so. We have a lot of stuff to work through."

It was also too soon to say for sure whether lending was finally loosening up. The sell-off on Wall Street last week was driven by fear that mistrustful banks were choking off the everyday loans that businesses use to buy supplies and pay their workers.

Monday was the Columbus Day holiday, and the U.S. bond markets and banks were closed, making it difficult to gauge the reaction of the credit markets to the measures taken by world governments.

The Bank of England said it would use up to $63 billion to help the three largest British banks strengthen their balance sheets. The Bank of England, the European Central Bank and the Swiss National Bank also jointly announced plans to work together to provide as much short-term money as necessary to help revive lending.

The heads of the five biggest U.S. banks - Goldman Sachs, Morgan Stanley, Citigroup, JPMorgan Chase and Bank of America - were meeting at the Treasury Department with officials from Treasury and the Federal Reserve. The discussions are aimed at finalizing details on the rescue package Congress passed Oct. 3.

That package started with the idea that the government would buy the bad mortgage-related debt off the books of banks. It now includes provisions for the government to buy ownership stakes in banks, among other steps.

It is coming together against the backdrop of a presidential election that has focused squarely on the economy. Sens. Barack Obama and John McCain are to meet for a final debate Wednesday night on Long Island, with the state of the nation's finances sure to be at the top of the list.