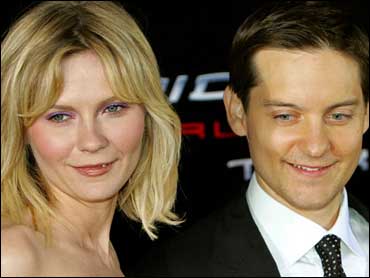 "Spider-Man 3" took in a record $59 million domestically on opening day Friday, breaking the previous all-time high of $55.8 million for "Pirates of the Caribbean: Dead Man's Chest" in its first day last summer.

Sony Pictures, the studio behind the "Spider-Man" franchise, also reported Saturday that the movie took in an additional $45 million overseas on Friday for a worldwide total of $104 million, a record for single-day grosses globally.

Sony spokesman Steve Elzer said executives at the studio declined to comment until estimates for the full weekend are available Sunday morning.

By then, the "Spider-Man" franchise could reclaim the record for best three-day opening ever. The first "Spider-Man" pulled in $114.8 million domestically in its debut weekend in 2002, a record that stood until "Dead Man's Chest" shattered it with $135.6 million last July.

In a news release, Sony said it expects "Spider-Man 3" will come in around the $135 million to $145 million range for its first weekend.

"That's why they call him the amazing Spider-Man," said Paul Dergarabedian, president of box-office tracker Media By Numbers. "Just five years ago, these are numbers we thought we'd never see."

"Spider-Man 3" opened to record numbers in some countries as early as Tuesday and expanded to other locations over the next few days. Elzer said figures for the film's total worldwide haul since Tuesday would not be released until Sunday.

"It certainly doesn't hurt to have that much shelf space devoted to `Spider-Man,"' Dergarabedian said.

"Spider-Man 3" stars Tobey Maguire as Peter Parker, who becomes the web-slinging superhero after a bite from a mutant spider endows him with special powers. The new film reunites Maguire with director Sam Raimi and co-stars Kirsten Dunst as Peter's girlfriend Mary Jane and James Franco as his old friend Harry, now a sworn enemy who blames Spidey for his father's death.

Along with two new villains (Thomas Haden Church and Topher Grace), Spider-Man battles inner demons after an alien entity turns his red-and-blue suit black and he's tempted to use his powers for evil.