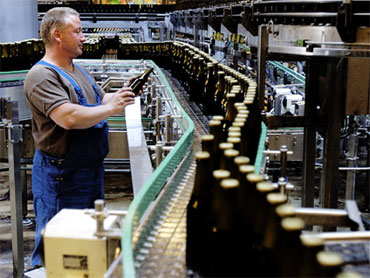 The feeble economy exhibited a smidgen of strength Thursday, with mildly positive reports on jobs, store sales and housing.

Figures released on unemployment claims, store sales and home-buying contracts all trend in the right direction, tempering fears that the economy is on the brink of another downturn. Still, growth remains anemic, and a report Friday is forecast to show that employers have yet to step up hiring.

For now, companies aren't resorting to widespread layoffs. New applications for unemployment benefits declined for the second straight week after rising in the previous three to above the half-million mark.

"This is something of a relief, because it suggests that the 504,000 claims number from two weeks ago was a fluke rather than an indication that the trend has suddenly surged higher," said Ian Shepherdson, chief U.S. economist at High Frequency Economics.

If claims don't rise from their current level, that "would be consistent with ... very sluggish growth rather than a double-dip recession," he added.

Claims for unemployment aid fell last week by 6,000 to a seasonally adjusted 472,000, the Labor Department said. There would be far fewer claims in a healthy economy. When economic output is growing rapidly and employers are hiring, claims generally drop below 400,000.

The Labor Department is forecast to report Friday that private businesses added a net total of only 41,000 jobs last month, the fourth straight month of anemic hiring. When government jobs are included, total payrolls are forecast to drop by 100,000 based mostly on about 115,000 temporary census jobs ending.

The jobless rate is projected to rise to 9.6 percent from 9.5 percent, according to Thomson Reuters. Many economists expect growth to proceed at such a weak pace that the unemployment rate could top 10 percent by next year.

One positive sign for future hiring: The Labor Department said productivity, or output per hour worked, fell in the spring by the largest amount in nearly four years while labor costs rose. That follows rapid increases in efficiency during the recession and indicates companies may not be able to squeeze more work out of their reduced work forces.

"Once businesses have seemingly gotten everything they can out of their workers, it is usually a harbinger of future job creation," said Brian Levitt, an economist at OppenheimerFunds.

Retailers, meanwhile, reported surprisingly strong sales in August compared to a year ago. They were helped by aggressive discounting, even as unusually hot weather and job worries kept a lid on back-to-school buying.

The International Council of Shopping Centers' index of 31 major retailers was up 3.2 percent in August, following a 2.8 percent gain in July.

Shoppers remain selective and are focusing on the necessities, a trend that is expected to continue through at least the holiday shopping season.

In housing, perhaps the weakest area of the economy, a report from the National Association of Realtors offered some mild optimism. The number of people who signed contracts to buy homes rose in July, though the total remained well below levels last year.

Home sales are at the lowest level in more than a decade, even as mortgage rates plummet. The average 30-year mortgage dropped to 4.32 percent this week, down from 4.36 percent last week, according to mortgage buyer Freddie Mac. That's the 10th time in the past 11 weeks that rates have hit their have lowest level since Freddie Mac began tracking them in 1971.

In another report, factory orders rose slightly in July after two months of declines, but most of the gains were a result of higher airplane orders. Excluding transportation, orders fell 1.5 percent, the biggest drop in 16 months.

Still, concerns that manufacturing could be faltering were eased on Wednesday with a private trade group's report that showed the industrial sector grew for the 13th straight month in August.

The pace of economic growth has slowed considerably from earlier this year, as the impact of the government's stimulus package fades. Many economists are increasingly pessimistic that private companies will do enough hiring and spending to replace the impact of the stimulus.

Without more jobs, consumers will likely spend cautiously, making it harder or the economy to gain steam. Consumer spending accounts for about 70 percent of economic activity.

The nation's gross domestic product, the broadest measure of economic output, grew at a 3.7 percent annual pace in the first quarter, but that slowed dramatically to 1.6 percent in the April-to-June period. That's not fast enough growth to bring down unemployment.

Economists at Bank of America-Merrill Lynch on Wednesday marked down their estimates of future economic growth. They now expect the economy to grow at only a 1.8 percent pace next year, down sharply from an earlier estimate of 2.3 percent.

Comair, a regional airline owned by Delta Air Lines Inc., said Wednesday that it will reduce its fleet by half and cut jobs over the next two years to lower costs. The company, which employs about 2,600 people, didn't say how many jobs would be affected.

Heavy equipment maker Caterpillar Inc., meanwhile, is headed in the other direction. It opened a new road grader factory Wednesday in North Little Rock, Ark. That will create 600 jobs.