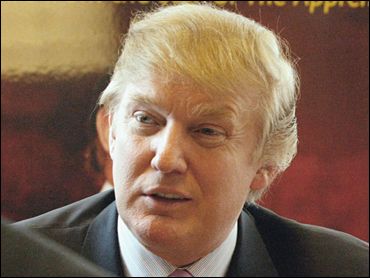 Thursday night was a big night for reality TV: Donald Trump hired Bill on "The Apprentice," Kathy's torch was snuffed out on "Survivor: All-Stars, and Jon Peter Lewis' hopes of being the next "American Idol" were dashed.

No matter where you go today, you're bound to find people talking about one of these three shows.

He says, "One is production values. When you look at the two programs, 'Survivor' and 'The Apprentice,' production is extremely high, not on a shoestring budget. All three shows cross demographics. You have few niche shows like 'Extreme Makeover' or 'The Bachelor' that everyone watches. But they're the new family shows. Everyone gathers around and watches them, not just people in dorm rooms, but parents, grandparents, kids."

And yet, he notes, the deceit and back stabbing that can mark a rise to the top may be a twisted message to give to such an audience.

Asked if having hired Bill over Kwame was the right choice for Trump to make, Ross says, "I think he did. I sort of like Kwame better as a person, but I think Bill would be better for the job. The way Kwame let Omarosa walk all over him, I thought, was bad management."

What he didn't like about the live reunion half-hour show was the fact that Trump, playing host, was obvious at reading the teleprompter. "He should fire himself," Ross says. "He was sitting there stiff and [saying] 'Congratulations, Bill,' and he's sort of reading. They should have brought someone in to handle that. Maybe ask Trump some questions."

Nevertheless, the show has staying power. Dalton says, "It is an urban 'Survivor.' It's still people going at each other, competing against each other, just in an urban environment. I think Donald Trump's hair will hypnotize us for two more seasons. You can't turn away. They've already committed to two more seasons and probably more after that."

As for "Survivor," it has proved itself for eight seasons. What gives the show such longevity is its great production value, Dalton says. "Exotic locales, beautiful scenery. It's a can't-miss formula. A few little twists here and there. As long as you have good casting and great personalities, to see what these people will do on an island, stuck with each other, is still fascinating in season eight."