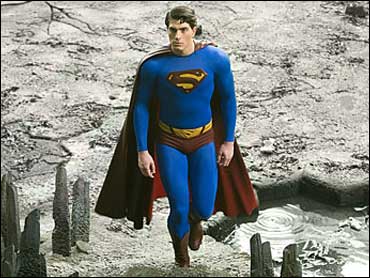 A mineral recently discovered in Serbia has the same composition as kryptonite — the fictional substance that robs Superman of his powers — the British Museum said Tuesday.

While the material is not a perfect match, its chemical breakdown is strikingly similar.

A drill core of the unusual mineral was unearthed in Serbia by the mining group Rio Tinto PLC, which turned it over to mineral expert Chris Stanley at the Natural History Museum for analysis.

"Towards the end of my research I searched the Web using the mineral's chemical formula, sodium lithium boron silicate hydroxide, and was amazed to discover that same scientific name written on a case of rock containing kryptonite stolen by Lex Luthor from a museum in the film 'Superman Returns,'" Stanley said.

The material is white, powdery and not radioactive — unlike the glowing green crystals usually depicted in the Superman comics. It will be formally named Jadarite when it is described in the European Journal of Mineralogy later this year.

Approximately 30 to 40 new minerals are discovered each year, the museum said, although usually only in the form of a few grains only visible under the microscope.