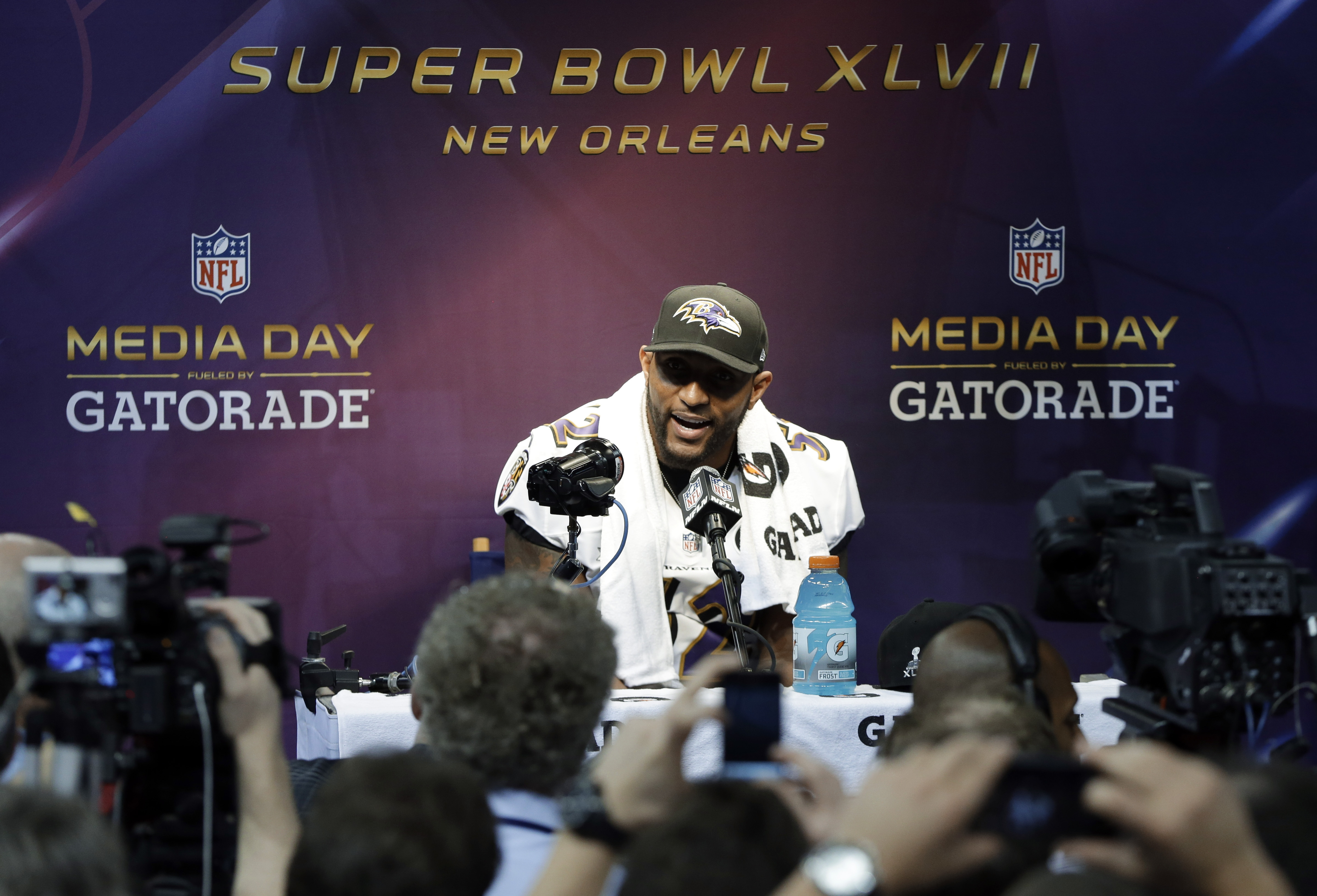 NEW ORLEANS Of all the topics Baltimore Ravens linebacker Ray Lewis wanted to talk about at Super Bowl media day, deer-antler spray probably was not on the list.

He declined to directly address in any detail Tuesday questions about a Sports Illustrated report that he sought help from a company that makes the unorthodox product to speed up his recovery from a torn right triceps. Lewis was the NFL's leading tackler in the playoffs after missing 10 regular-season games with the injury.

The 37-year-old Lewis, who has announced he will retire after playing against the San Francisco 49ers in Sunday's Super Bowl, dismissed the report as "stupidity."

Sport Illustrated reported that SWATS owner Mitch Ross recorded a call with Lewis hours after the player hurt his arm in an October game against Dallas. According to the report, Lewis asked Ross to send him deer-antler spray and pills, along with other products made by the company.

The magazine also said that when it spoke to Lewis for its story, he acknowledged asking Ross for "some more of the regular stuff" on the night of the injury and that he has been associated with the company "for a couple years through Hue Jackson."

Jackson is a former Ravens quarterbacks coach — and later head coach of the Oakland Raiders. Two years ago he stopped endorsing SWATS because his ties to the company violated NFL rules.

"That was a 2-year-old story that you want me to refresh ... so I won't even speak about it," Lewis said Tuesday. "Because I've been in this business 17 years, and nobody has ever got up with me every morning and trained with me. Every test I've ever took in the NFL — there's never been a question of if I ever even thought about using anything. So to even entertain stupidity like that. ..."

"The team knew about this report. Ray denies taking anything and has always passed tests," Ravens spokesman Kevin Byrne said.

Baltimore coach John Harbaugh said he found out about the SI story during the team's bus ride to the Superdome for media day.

"I have not talked to Ray about that personally," Harbaugh said. "What I do know about that is Ray has worked incredibly and extremely hard to get back, so I hate to see anything diminish the work ethic that he's put in to get to where he is right now. And my understanding is Ray has passed every random, you know, substance test that he's taken throughout the course of his whole career. So there's never been a test that's shown up anything along those lines."

All in all, the topic only added to what already was a week filled with plot lines connected to Lewis.

There is the largely rehabilitated image of a man who pleaded guilty to obstruction of justice in connection with a double murder after a Super Bowl party at an Atlanta nightclub in 2000. There is the impending retirement, a self-titled "last ride" for a player widely considered one of the top defenders in NFL history and the Super Bowl MVP in 2001.

And there is his recovery from what was originally thought to be a season-ending injury.

"When I tore my tricep, the doctor looked at me after I went in the office and she told me that I was out for the year. And I said, `Doc, are you sure?' I said, `Nah.' I said, `Doc, there's no way I'm going to be out for the year with just a torn tricep,' " Lewis said with a laugh Tuesday. "I said, `I've been through way worse.' She was like, `Ray, nobody's never come back from this.' I said, `Well, nobody's ever been Ray Lewis, either.' "

Here is an excerpt of the purported phone conversation between Lewis and SWATS owner Mitch Ross, as reported by Sports Illustrated (via CBSSports.com):

"Hours after he tore his triceps during an Oct. 14 home game against the Cowboys, Ravens All-Pro linebacker Ray Lewis and Ross connected on the phone. Again, Ross videotaped the call.

"It's bottom, near the elbow," Lewis said of the tear. After asking a few pseudo diagnostic questions, Ross concluded, "All right, well, this is going to be simple. ... How many pain chips you got around the house?"

"I got plenty of them," Lewis replied.

Ross prescribed a deluxe program, including holographic stickers on the right elbow; copious quantities of the powder additive; sleeping in front of a beam-ray light programmed with frequencies for tissue regeneration and pain relief; drinking negatively charged water; a 10-per-day regimen of the deer-antler pills that will "rebuild your brain via your small intestines" (and which Lewis said he hadn't been taking, then swallowed four during the conversation); and spritzes of deer-antler velvet extract (the Ultimate Spray) every two hours.