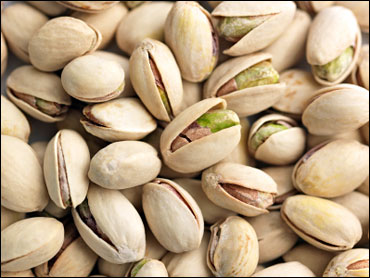 The company at the center of a nationwide pistachio recall said Tuesday the salmonella contamination could have come from raw nuts during processing but likely not a human or animal source in its plant.

Lee Cohen, the production manager for Setton International Foods Inc., said the company suspects roasted pistachios sold to Kraft Foods may have become mixed at Setton's plant with raw nuts that could have contained traces of the bacteria.

The pistachios were processed at central California-based Setton Pistachio of Terra Bella Inc., which is in the corporate family of Setton International Foods Inc. Cohen is in California to help with the investigation.

Federal health officials warned people on Monday not to eat any products containing pistachios while they investigate the salmonella scare.

"Avoid pistachios while we're working this out," Dr. David Acheson, assistant commissioner for food safety, told CBS' The Early Show Tuesday. Acheson said there was no large outbreak reported and there is no need to throw the nuts away.

"Our advice to consumers is that they avoid eating pistachio products, and that they hold onto those products," said Dr. David Acheson, assistant commissioner for food safety. "The number of products that are going to be recalled over the coming days will grow, simply because these pistachio nuts have then been repackaged into consumer-level containers."

Two people called the FDA complaining of gastrointestinal illness that could be associated with the nuts, but the link hasn't been confirmed, Acheson said. Still, the plant decided to shut down late last week, officials said.

The FDA learned about the problem last Tuesday, when Kraft Foods Inc. notified the agency that routine product testing had detected salmonella in roasted pistachios. Kraft and the Georgia Nut Co. recalled their Back to Nature Nantucket Blend trail mix the next day.

Kraft spokeswoman Laurie Guzzinati said the company's auditors "observed employee practices where raw and roasted nuts were not adequately segregated and that could explain the sporadic contamination."

She said she didn't know what they saw specifically, but "that's how the auditors shared the information with us."

Kraft expanded its recall this Tuesday to include any Planters and Back to Nature products that contain pistachios supplied by Setton Pistachio after Sept. 1.

"Safety is our top priority," Guzzinati said. "We're proud of our quality and the procedures we have in place. This is always a place we look for continuous improvement. In this instance when it was brought to our attention we were able to act and respond."

The recalled nuts are a small fraction of the 55 million pounds of pistachios that the company's plant processed last year and an even smaller portion of the 278 million pounds produced in the state in the 2008 season, according to the Fresno-based Administrative Committee for Pistachios.

California is the second-largest producer of pistachios in the world.

The latest recall is not related to the nationwide recall of peanuts, but it does speak to the state of food safety nationwide.

"We have a huge, huge problem in food safety where we're seeing over and over again these scandals," said Dara O'Rourke, Associate Professor of Environmental and Labor Policy at the University of California at Berkely "The industrialization of our food system has a cost."

In spite of the growing popularity of farmers' markets, most of our food is now part of a nationwide, even worldwide, distribution system where a problem in one place can quickly spread everyplace, CBS News correspondent John Blackstone reports.

Oregon state officials said four people from the Portland region were among those sickened. The Public Health Division said the Union International Food Co. of Union City has launched a spice recall for ground pepper sold under the Lian How and Uncle Chen labels.

Other cases were reported in California, Washington and Nevada.