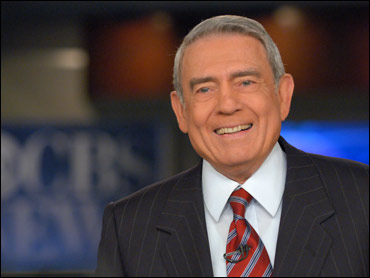 Dan Rather ended an era at CBS News on Wednesday night by signing off as Evening News anchor with a familiar message:

Rather, who spent 24 years in the anchor chair, closed the news program with these words:

"To our soldiers in dangerous places. To those who have endured the tsunami and to all who have suffered natural disasters, and who must find the will to rebuild. To the oppressed and to those whose lot it is to struggle, in financial hardship or in failing health. To my fellow journalists in places where reporting the truth means risking all. And to each of you: 'Courage.'"

Rather is passing the baton to CBS News Chief Washington Correspondent Bob Schieffer, who will anchor the show until a permanent replacement is chosen. Rather stepped down 24 years to the day after he replaced another CBS News icon: Walter Cronkite.

Rather tied his final message to the tragic events of Sept. 11.

"Not long after I first came to the anchor chair I briefly signed off using the word 'courage.' I want to return to it now, in a different way, to a nation still nursing a broken heart for what happened here in 2001, and especially those who found themselves closest to the events of Sept. 11," he said.

In September 1986, Rather began signing-off newscasts with the word "courage." But he dropped that sign off a week later.

After the broadcast, about two hundred CBS News employees crowded the Evening News studio and gave Rather an ovation that lasted several minutes.

Rather said the ovation was "overdone," but then noted that anything worth doing was worth overdoing.

The newsman's wife of 48 years, Jean, stood near the anchor desk, smiling but wiping tears from her eyes. CBS News executives and correspondents toasted Rather with champagne and Wild Turkey, Rather's favorite adult beverage.

The end of Rather's run at the Evening News does not mean retirement. He will remain on as a correspondent for both editions of "60 Minutes."

During his long and prolific career with CBS News, the 73-year-old Rather has written six books, anchored six presidential election campaigns and covered a dozen wars on five continents.

He has braved hurricanes, waded through flood waters, dodged bullets, comforted wounded GIs, mouthed off to presidents, wept on camera, become a lightning rod for conservatives and been badly beaten by a dangerous maniac on Park Avenue.

A 50-year career in journalism has made Rather a witness to modern American history: the assassination of President Kennedy, the civil rights movement, Watergate, wars in Vietnam and Iraq. The correspondent and anchorman has also interviewed hundreds of world leaders and newsmakers ranging from Mother Teresa to Saddam Hussein.

This road well traveled has been strewn with "Ratherisms," folksy sayings that can make one smile or wince or both. It was Rather who told us that the Florida presidential race was as "hotter than a Times Square Rolex" and who reminded us of the importance of swing states: "It don't mean a thing if they don't get those swings."

But Rather's departure from the Evening News has been clouded by his high-profile role in a flawed CBS News story about President Bush's National Guard service and some harsh comments from old CBS colleagues, including Cronkite, who suggested Schieffer should have been given the anchor job years ago.

Last September, Rather was the correspondent on a "60 Minutes Wednesday" piece that used documents that purported to show Mr. Bush received preferential treatment during his years in the Texas Air National Guard.

The authenticity of the documents was almost immediately questioned, but CBS News and Rather continued to defend the story long after it was broadcast. An independent panel that probed the network's handling of the story concluded CBS News failed to follow basic journalistic principles in the preparation and reporting of the piece.

The panel also said CBS News had compounded that failure with a "rigid and blind" defense of the story. As a result of the panel report, four CBS News employees lost their jobs.

Rather has repeatedly apologized for his role in the story and expressed regrets about the fate of his colleagues.

"First and foremost is that four people lost their jobs over it. And I don't have them – I never have them far from my mind," Rather said. "Also I want to say personally and directly I'm sorry. I regret every nanosecond when I let anybody at CBS News down and even more when I let the audience down. It's painful to me."

Although the Guard story was a low point in Rather's career, it was far from his only brush with controversy. There were well-publicized run-ins with two top Republicans, Richard Nixon and President Bush the elder. And in 2001, he made an embarrassing appearance at a Democratic fundraiser in Texas hosted by his daughter.

These events contributed to Rather's status as a lightning rod for conservative critics who view him as a symbol of what they see as the media's liberal bias.

The Texas-born Rather has always dreamed of a career in journalism. He grew up in Houston, where he began reporting the news for local radio and TV stations.

"We didn't own a TV set, and we didn't know anybody who did," Rather recently told the Texas Monthly. "My dream was to be a byline reporter on either the Houston Chronicle or the Houston Post."

His breakthrough came in 1961, when his daring coverage of Hurricane Carla for KHOU-TV attracted the attention of CBS.

Below are some memorable events in his CBS career: