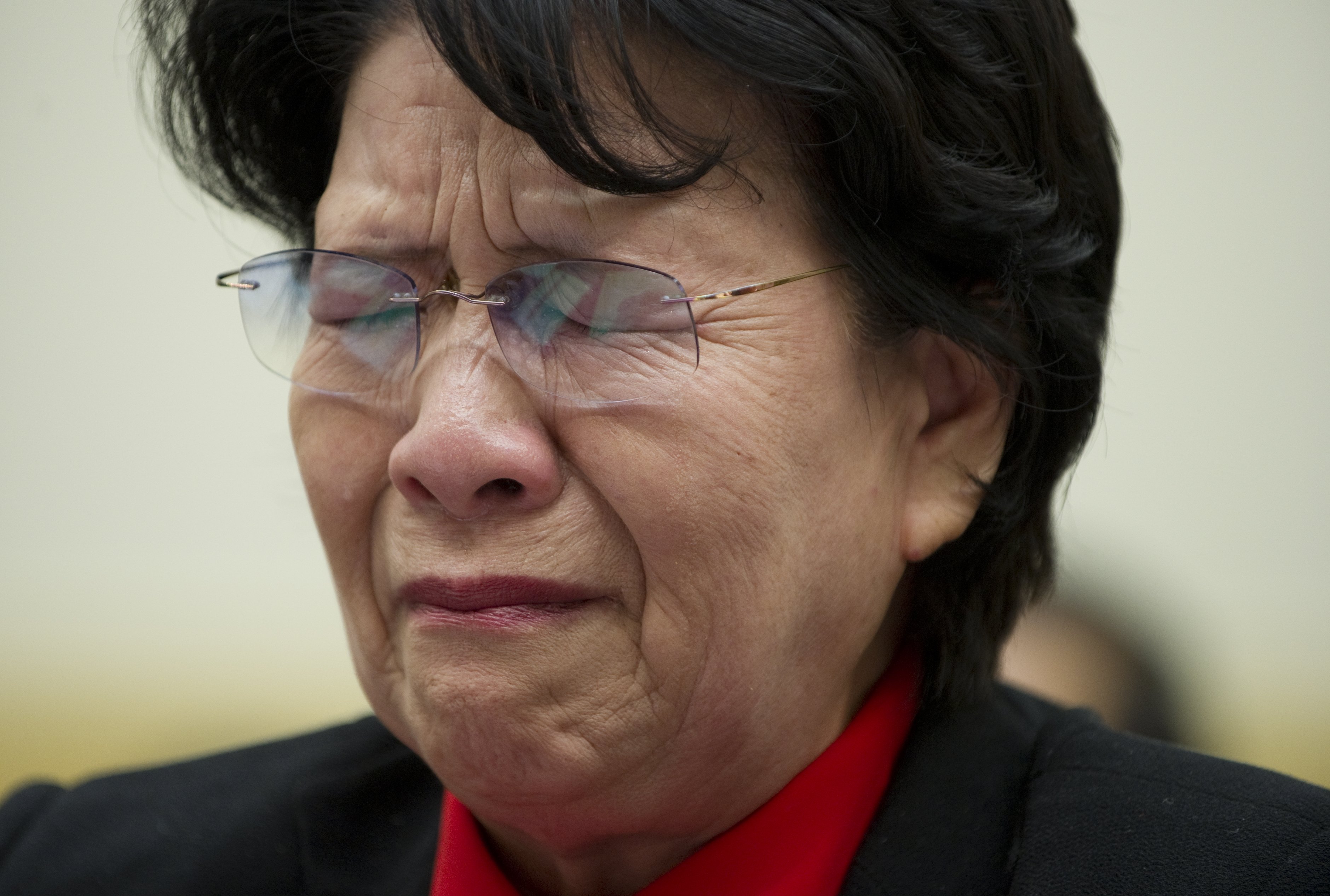 The meeting appeared to be the first time that any country's human rights situation has been scheduled for ongoing debate by the U.N.'s most powerful body, meaning that the issue now can be brought up at any time. It also came amid U.S. accusations that North Korea was behind a devastating hacking attack.

"Today, we have broken the council's silence. We have begun to shine a light, and what it has revealed is terrifying," U.S. Ambassador Samantha Power said.

In a report issued earlier this year, the UN Human Rights Council Commission estimated that up to 100,000 people are being held in prison camps. Power summarized hours of witness accounts of victims, which she said were corroborated by satellite images confirming the location of prison camps.

Ahn Myong Chul, a former guard, spoke of guards routinely raping prisoners, Power said. A former prisoner, Kim Young-soon, said she and other prisoners were so hungry they picked kernels of corn from cattle excrement.

"If there was a day that we were able to have mouse, that was a special diet for us," the woman said, according to Power. "We had to eat everything alive, every type of meat we could find. Everything that flew, that crawled on the ground, any grass that grew in the field."

The report also cited the dire repercussions for trying to flee the country. One woman recounted how her brother was caught after fleeing to China.

"When he was returned, North Korean security officials bound his hands and chained him to the back of a truck before dragging him roughly 45 kilometers, driving three loops around the city so everyone could see," Power said, citing the woman's testimony.

International pressure has built this year on Pyongyang after a U.N.-backed inquiry found grounds to believe that crimes against humanity have been committed under policies "established at the highest level of the State for decades." In a letter to Kim, the commission also warned that he could be held accountable.

China and Russia, which hold veto power as permanent council members, protested the boldest effort yet to confront Pyongyang over an issue it has long disdained.

The council "should refrain from doing anything that might cause the escalation of tensions," said China's ambassador, Liu Jieyi.

An angry North Korea refused to recognize the meeting. "We totally reject the attempt" to bring the human rights issue to the council, North Korean diplomat Kim Song told The Associated Press shortly after the meeting began. He rejected the idea of dialogue or a visit to North Korea by a U.N. human rights investigator, and he insisted that the council should look into Washington's recently released CIA torture report.

North Korea also has called the dozens of people who fled the North and aided the commission of inquiry "human scum."

The U.N.-backed inquiry and the U.N. General Assembly have urged the 15-member council to refer North Korea's human rights situation to the International Criminal Court. Permanent council members the U.S., France and the U.K. said it should be considered, but the council did not take action Monday.

The council has had North Korea's nuclear program on its agenda for years, but Monday's meeting opens the door to wider discussion of abuses alleged in the inquiry, including a harsh political prison camp system of up to 120,000 inmates. Pyongyang rejects the inquiry's findings but never allowed it into the country. China did not allow a visit to its border area with North Korea, to which thousands have fled.

Victor Cha, who served as director of Asia policy when George W. Bush was president, warned that North Korea likely sees both the council's action and a now-shelved Hollywood film that depicts Kim's assassination as hostile actions by the West.

"We could see escalation on the cyber front, but I wouldn't rule out a nuclear test," Cha said. "It feels like we are headed for some sort of crescendo."

Two-thirds of the Security Council this month formally requested that North Korea's human rights situation be placed on the agenda for ongoing debate, saying rights violations "threaten to have a destabilizing impact" on the region.

"Rarely has such an extensive charge-sheet of international crimes been brought to this council's attention," U.N. Assistant Secretary-General for Human Rights Ivan Simonovic said Monday. He said North Korea has shown "promising signs of engagement" since the inquiry came out early this year, but he stressed that real change in its human rights situation "will require not only reform; it demands justice."

China could block any eventual action against its traditional but troublesome ally. But the mere threat of any damage to Kim Jong Un's image has outraged the North Korean government.

Such fury is thought to be behind a recent hacking attack on Sony, which last week canceled the scheduled release of "The Interview." That set off alarm among some diplomats who warned of setting a precedent for backing down in the face of future threats. North Korea denied the hacking but has suggested it was a "righteous deed" carried out by sympathizers.

Power on Monday described as "absurd" North Korea's threat of serious consequences if the U.S. doesn't conduct a joint investigation into the hacking.

North Korea experienced sweeping and progressively worse Internet outages extending into Monday, with one computer expert saying the country's online access was "totally down." The White House and the State Department declined to say whether the U.S. government was responsible.