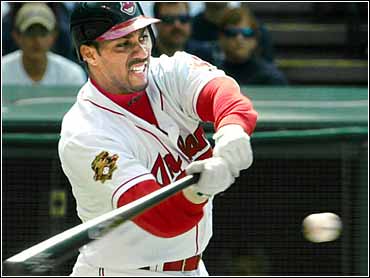 Juan Gonzalez is returning to the Texas Rangers, agreeing Tuesday night to a $24 million, two-year contract.

Gonzalez, who turned down two-year offers from the New York Mets and Baltimore, rejoins the team he played for when he won two AL MVP awards. He is Rangers' career leader in home runs and RBIs.

"We've got four potential first-ballot Hall of Famers on this club, so he doesn't have to come in here and carry the load, be the guy - but being in the middle of the order, he'll be a key component to our offense," Rangers general manager John Hart said.

Hart was Cleveland's GM last season when he signed Gonzalez to a $10 million, one-year deal. Now in Texas, Hart undid one of the boldest moves of his predecessor, Doug Melvin, who sent Gonzalez to Detroit after the 1999 season, a year before he could become a free agent.

Gonzalez gets a $2 million signing bonus, $10 million this year and $12 million in 2003. The Rangers will defer $4 million of his salary this year and $6.5 million next season.

"It's hard to imagine we can get a player of this magnitude for these kind of dollars," Hart said. "But this is a player who wants to come back here. My sense was he turned down more money to come back home. It's part of Juan buying into what we're doing here. I take my hat off to him. It was important for him to come back."

Gonzalez turned down a $25 million, two-year offer from the Mets, who up until Tuesday night thought they had a chance to land him. New York's offer included a $12 million signing bonus paid over the two years. None of the salaries would have been deferred.

"We made a fair offer. It wasn't about money," Mets general manager Steve Phillips said. "At some point what came into play was his reluctance to leave the American League. That became a factor over the weekend and it was one we wish we could have dispelled."

The Rangers' offer to Gonzalez was close to the bid by the Mets because Texas does not have a state income tax. Gonzalez also was skittish about going to the National League for the first time and he previously has been cool to the pressure of playing in New York.

"We wish him luck in Texas," Mets co-owner Fred Wilpon said. "I think he would have been great with the Mets."

Texas' deal is contingent on Gonzalez passing a physical, which Hart doesn't see as much of an obstacle despite the slugger's history of back trouble.

"I had the guy all last year, so I've got a good feel for exactly where he's at," Hart said. "With the great condition he keeps himself in, it's not an issue."

Hart added that Gonzalez has an inner-ear infection and can't travel, so the exam likely will take place in Puerto Rico.

"We don't need to bring him in," Hart said. "Everyone here knows him."

Gonzalez, 32, won the AL MVP award with the Rangers in 1996 and 1998, thn was traded to the Tigers in November 1999 as part of a nine-player deal. Following a down year with the Tigers in which his back bothered him, Gonzalez rebounded to hit .325 for Cleveland last year with 35 homers and a team-high 140 RBIs.

"It was a gut-wrenching decision-making process," said Gonzalez's agent, Jeff Moorad. "He was truly torn between the two situations that represented his finalists. In the end, the ability to stay in the American League and to return to a city that had a great deal of familiarity appealed to most to Juan."

Two years ago, Gonzalez turned down a $143 million, eight-year extension offered by the Tigers. Gonzalez switched agents after the season and Hart signed him to the one-year deal.

"I think from the beginning, neither of us envisioned the Rangers as being a serious player," Moorad said. "It was only as the process developed and the other teams got more serious that Texas stepped up, Call it lying in the weeds, call it a proven technique that's worked for John Hart two years in a row, call it what you want, John picked his time and stepped forward along with (owner) Tom Hicks and made a compelling sell."

Hart left the Indians after the 2001 season to become GM of the Rangers and has put the team through a busy transformation following a disastrous season. Despite signing Alex Rodriguez to a record $252 million, 10-year contract in December 2000, Texas went 73-89, finishing last in the AL West, 43 games behind the division-winning Seattle Mariners.

Adding Gonzalez leaves Texas flush with outfielders. The odd man out is likely Gabe Kapler, whose youth and potential could bring a decent pitcher to a team desperately lacking them.

"Let me enjoy this for a night," Hart said, laughing.

By Jaime Aron © MMII The Associated Press. All Rights Reserved. This material may not be published, broadcast, rewritten, or redistributed