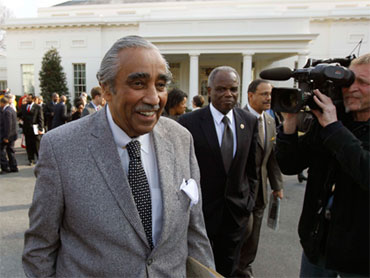 Democratic Reps. Charles Rangel and Maxine Waters, both of whom have been recently overwhelmed by media attention devoted to House ethics charges brought against them, may not face hearings related to those charges until after the November midterm elections, according to political watchdog organizations.

The House ethics committee filed charges against both Rangel and Waters over the summer, but trial dates have not yet been set for either representative - and some fear that holding the hearings in the months leading up to the November elections could be politically damaging to Democrats.

"I think ethics hearings shortly before the midterm elections overly politicizes the ethics process, which in the long term, is not in anyone's interest," said Melanie Sloan, executive director of Citizens for Responsibility and Ethics in Washington, according to a report by The Hill.

Both Rangel and Waters plan to battle the charges filed against them, which could result in attention-getting, highly-publicized affairs.

According to the rules of the committee, trials for Rangel and Waters could take place as early as October, if the committee submits the evidence it plans to use to the representatives when it returns this week. But the hearings have already faced extensive delays.

"Both of these pending trials should have been concluded months ago," said Craig Holman of Public Citizen, according to The Hill. "The House ethics committee stumbled miserably in these cases, allowing them to be delayed and delayed, until they have become hot election issues."

Members of the ethics committee have alleged that Rangel, in responding slowly to their requests for information, is partially responsible for the delays associated with his hearing, according to The Hill.

Rangel, a 20-term congressman from New York's Harlem neighborhood, has been charged with 13 violations of congressional ethics standards, including hundreds of thousands of dollars' worth of unreported income.

Waters, who has been serving in California's 35th district since 1991, is accused of wielding her political clout to help the Massachusetts-based OneUnited Bank, a bank in which her husband was associated.

The "Ways and Means" of Charlie and Other "Ranglers"
Maxine Waters to Face Ethics Trial
Rangel Defiant, Dares House to Expel Him