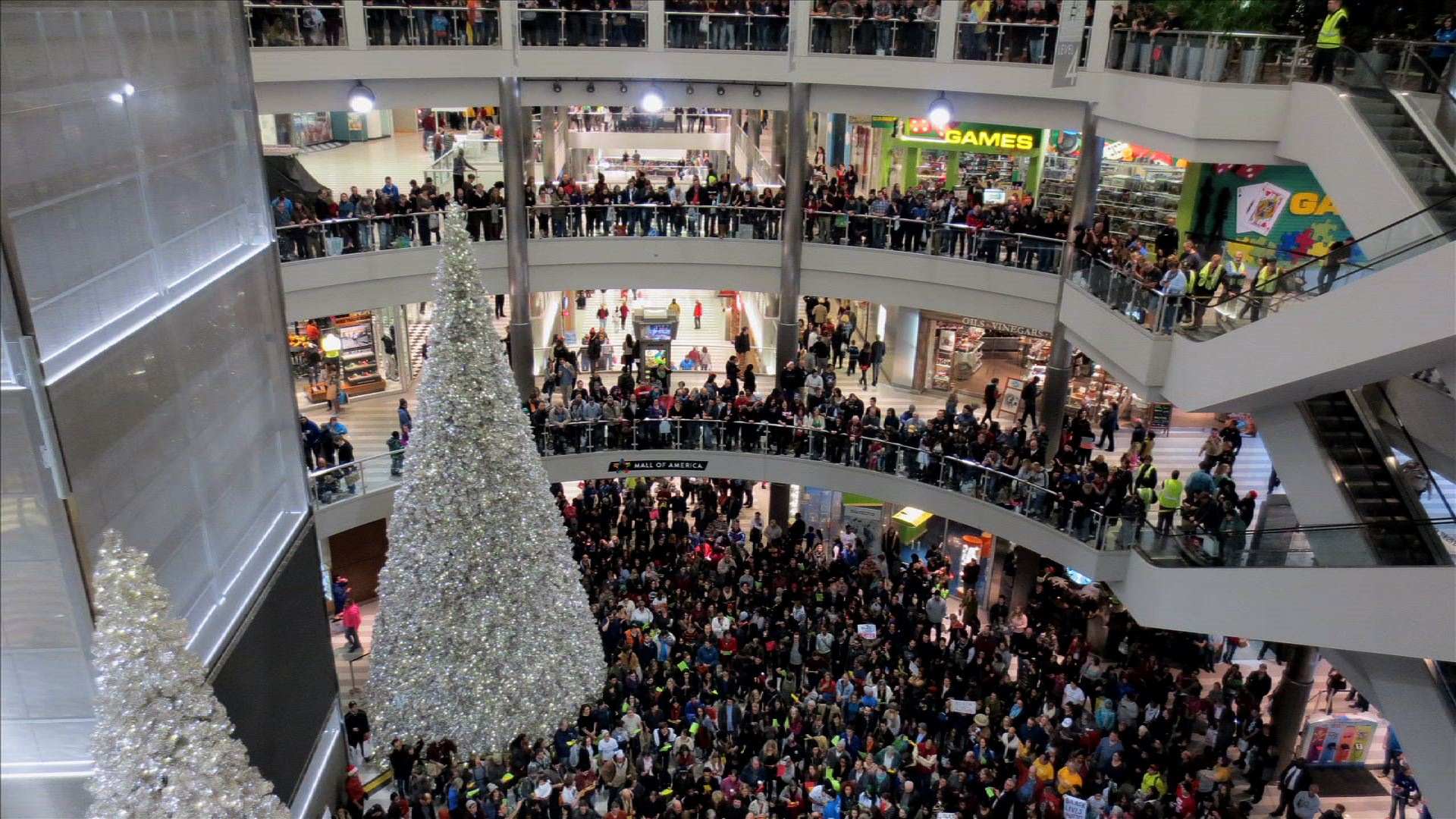 BLOOMINGTON, Minn. -- A mass of demonstrators chanting, "Black lives matter," converged in the Mall of America rotunda Saturday as part of a protest against police brutality that caused part of the mall to shut down on a busy day for last-minute holiday shopping.

The rally was part of protests happening nationwide after officers weren't charged in the deaths of unarmed black men in Missouri and New York.

During the rally, protesters shouted "No justice, no shopping," and "While you're on your shopping spree, black people cannot breathe" -- a reference to the chokehold police placed on Eric Garner, who died in New York.

"The message we're trying to say is that no longer can business as usual continue," one organizer told CBS station WCCO in Minneapolis. "Today is one of the biggest shopping days in America, and Mall of America, as we see it, is the epitome of capitalism and a huge part of the problem. It's not just that black folks are dying; there're people who profit off of that."

Mall representatives had warned protesters in advance that they could be removed, arrested and banned. The mall's management issued a statement Saturday saying it was "extremely disappointed" that protest organizers ignored the policy banning political protests.

"It's clear from their actions that these political activists were more concerned about making a political statement and creating a media event than they were about the safety of others, who came to Mall of America for an afternoon of shopping and family entertainment," the statement said.

The mall increased security in advance of the protests and enacted a partial lockdown after it began, trapping some shoppers inside stores, according to WCCO. Mall representatives said the east side of the complex was shut down for the safety of shoppers and retailers while police were clearing the area. All stores had reopened by Saturday evening.

About 30 minutes after the demonstration began, a final warning to disperse was given, and police in riot gear began clearing the rotunda, WCCO reported. A large group of protesters began leaving the mall, but others migrated to a shopping area and occupied two levels. A small "die-in" was staged in front of several stores.

As the demonstrators were dispersing, they walked down the hall with their arms raised, shouting "Hands up, don't shoot!" That saying has been used in Ferguson, Missouri, in protests against the death of 18-year-old Michael Brown, and in demonstrations elsewhere.

Bloomington police said 25 people were arrested for trespassing, failure to disperse and disorderly conduct. Commander Mark Stehlik said he was not aware of any injuries or property damage.

The city attorney said authorities were recording video of the protests in an attempt to identify and prosecute its leaders.

"While we respect the rights of free speech and peaceful assembly, those rights do not trump our right as private property owners to prohibit that behavior on our property," the mall said Saturday.

Grimm told the Associated Press that organizers believed the protest was a success.

"Our goal is to bring more attention to these issues -- and what just happened, nobody can ignore," she said.