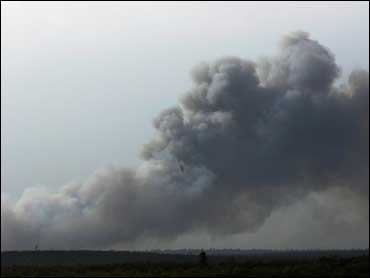 Rain reduced a 22-square-mile wildfire near a bombing range to mostly smoldering brush Thursday, but fire officials warned that the flames could rekindle if the wind picks up.

"A fire this big we're not going to be able to put out," said Bert Plante, a division fire warden for the New Jersey Forest Fire Service. "What we want to do today is push everything deep enough in so that if anything happens, it won't matter."

The fire, which started Tuesday after a military jet dropped a flare on the range, had sent walls of flames 80 to 100 feet high racing toward nearby senior citizen communities. Residents grabbed their pets and fled.

Only two minor injuries and no deaths have been attributed to the fire, but five homes in two senior citizen housing developments were destroyed, and 13 homes were damaged, officials said. About 6,000 people were initially evacuated, and some 500 remained in shelters overnight, authorities said.

Plante said crews should be able to get into the heart of the fire Thursday. He cautioned, though, that the fire could spread again if the temperature and winds pick up.

Dry conditions had fed the fire as it spread from the Warren Grove Gunnery Range, a 9,400-acre expanse of scrub pine used for military bombing practice. Lt. Col. James Garcia, a spokesman for the New Jersey Air National Guard, said the fire was believed to have been started with a flare dropped from one an F-16 fighter jet and an investigation was under way.

The range, about 25 miles north of Atlantic City, was also involved in the accidental strafing in 2004 of an elementary school during a training exercise.

Across the nation, it's been a busy fire season. The combination of low humidity, high winds and dry woods have not only spawned fires in New
Jersey, but also California, Arizona, Florida, Minnesota and Georgia, reports CBS News correspondent Randall Pinkston.

Firefighters continued to battle a massive fire along the Florida-Georgia state line, where more than 700 homes were evacuated.

In northern Minnesota, some residents were being allowed to check on their homes along the Gunflint Trail, where a fire has burned more than 117 square miles of Minnesota and Canada. More than 60 homes have been destroyed, but two days of wet, cool weather have helped firefighters make progress.

Near Payson, Arizona, a much smaller wildfire forced a few dozen people to evacuate homes on Thursday. Authorities believe the fire, which started Sunday, was human-caused.