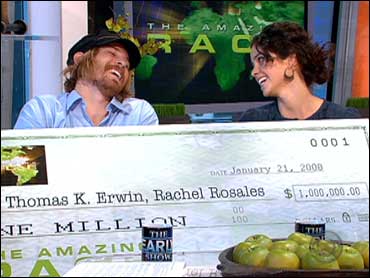 The first team to cross the finish line was the "Newly Dating Team" of TK Erwin and Rachel Rosales.

But, "newly dating" doesn't appear to apply anymore and "in it for the long haul together" sure seems to for Erwin, 22 and Rosales, 23.

When they picked up their top prize in the form of a $1 million check on The Early Show Monday from "Race" host Phil Keoghan and Early Show co-anchor Harry Smith, Rosales said she and Erwin are "completely committed to each other. The money doesn't change anything."

To see photos of the original contestants in "Amazing Race 12, click here.

Erwin agreed, saying, "I definitely don't see a future without her."

Pressed by Smith to make a pre-Valentine's Day marriage proposal on the spot, Erwin said with a hearty laugh, "We'll save that for our next visit, OK?!"

During the around-the-world race's final leg in Anchorage, Alaska, the couple from Huntington Beach, Calif., searched through tanks filled with live crabs, scaled the side of a glacier, soared through the air in a helicopter, and solved a complicated puzzle before crossing the finish line at Girdwood Airport.

"Nice guys can definitely finish first," the dreadlocked Erwin said after their win.

"I knew it was going to be crucial to stay calm," Rosales said, referring to the complex puzzle composed of objects from previous challenges that contestants had to figure out before racing to the finish line.

In the twelfth edition of "The Amazing Race," racers trekked from the Playboy Mansion in Los Angeles through Ireland, the Netherlands, Burkina Faso, Lithuania, Croatia, Italy, India, Japan and Taiwan to their final destination in Alaska.

Scarpetta Back In 'Trace'