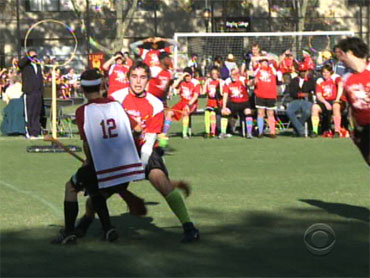 They swooped in from 16 states and 46 colleges - all for a sport that was born out of wizards and witches flying around on broomsticks - and J.K. Rowling's imagination.

"When you first hear about it you think there's no way this could work in real life," said Alex. "And when you see it, it's a cool game and you don't have to be a Harry Potter fan to appreciate it."

It's the 2010 Quidditch World Cup in New York City, a sport described as a cross between rugby, dodge ball and tag. It's also "complicated," said one player. "There are over 700 rules in Quidditch."

Seven players from each team storm an oval shaped field. The "chasers" try to score by hurling volleyballs through hoops. The "beaters" try to stop them.

"It's hard to describe when you see it, you get it," said Alex.

Of course, transforming a game that requires magic in movies requires a healthy dose of imagination.

"I don't want it to be taken too seriously," said Alex. "All of our announcers are improv comedians. Some players have advocated we get rid of the brooms and I say no way! Because that keeps it kid of ridiculous and that's the way I want it to stay!"

Quiddich is even more challenging because it is played with one arm.

"It's hard to run with a broom between your legs," said Devon. "Quidditch is not for the meek. It's a game that requires physical and mental toughness."

The first wave of Harry Potter readers are in college now.

"People say, 'you're playing quidditch, that's so nerdy,' but we say watch the game!" said one Harvard student. "It's a contact sport. It's a lot rougher than you think!"