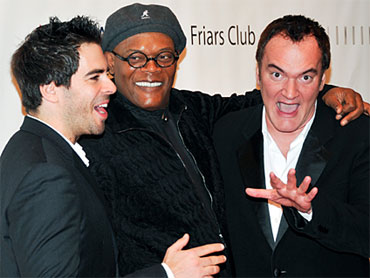 Filmmaker Eli Roth brought shock and awe to the podium of a Friar's Club Roast of actor Quentin Tarantino on Wednesday night, saying it was a roaster's responsibility to be sick and distasteful.

He didn't disappoint, covering ground that would make Richard Pryor blush - and offering no apologies.

"Pretty much what people say about 'Hostel 2,' I want them to say about my speech," Roth said referring to his 2007 horror flick.

Roth ripped the Weinstein's - filmmakers Harvey and Bob - who were sitting on the dais, joked about dead comic Greg Giraldo and poked fun at Tarantino's physical appearance. He also alluded to Tarantino's alleged foot fetish saying: "Quentin's got a bigger collection of women's shoes than Dachau."

Joining Roth at the event in New York was Sarah Silverman, Uma Thurman, Brett Ratner and roastmaster Samuel L. Jackson, who referred to the pack as a "true collection of freaks." Then he thanked Jim Henson, creator of The Muppets, for designing Tarantino's face, and kicked off the show.

Originally scheduled for October, the roast was postponed because of the death of Tarantino's longtime film editor and close friend Sally Menke. Freddie Roman of the Friar's Club said he feared the change in dates would lead to a lower turnout, but it seemed to have the opposite effect.

The event packed the Hilton ballroom, drawing a record-setting crowd of nearly 2,300. That's unprecedented for the fraternal organization.

While some of the acts were clearly funny, others were not as engaging. Harvey Keitel spent more time talking about "Reservoir Dogs" than making jokes. Ratner, a director, missed some of his timing cues, and Michael Madsen looked as if he had just rolled out of bed. While Keitel was spared by most, Ratner and Madsen were heavily attacked throughout the show.

Comedian Jeff Ross, who also serves at an "abbot" at the club, provided one of the funnier salutes. The comedy roast regular poked fun at Jackson, saying he should use the 'N' word more when making film choices. "And that word is 'No,'" Ross said before mocking Jackson in "Snakes on a Plane."

The comedian spoke of Tarantino's ample forehead, saying he would be screening his next film on it. At the end, he thanked him for making film geeks feel cool.

While nothing was off-limits, many jokes focused on Tarantino's infatuation with Uma Thurman. After her relatively tame speech, she took off her shoes, poured some wine, and the two shared a toast, leading to a rousing applause.

Other roasters included Kathy Griffin, Richard Belzer, Rob Schneider, Whitney Cummings, and 82-year-old Pat Cooper, who managed to get some hard laughs - and more importantly to him - a kiss from Thurman.

Friar's Club legend Jerry Lewis was the last to address the crowd, and the 85-year old managed to eke out a few laughs, and even an unprecedented expletive.

Tarantino hit the stage nearly two hours into the show and immediately quipped that doing the "no comedian thing was funny." He paid Jerry Lewis $24 that he said he owed from a telethon 40 years ago.

He then apologized for Jackson's performance, saying it was due to "not writing his dialogue for him."