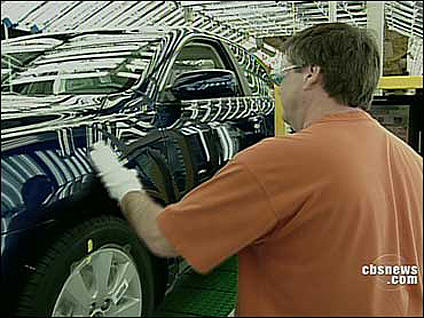 LOUISVILLE, Kentucky — Toyota Motor Corp. said Monday that it's inevitable that the company will be forced to temporarily shut down all of its North American factories because of parts shortages due to the earthquake that hit Japan.

The temporary shutdowns are likely to take place later this month, affecting 25,000 workers, but no layoffs are expected, spokesman Mike Goss said. Just how long the shutdowns last or whether all 13 of Toyota's factories will be affected at the same is unknown and depends on when parts production can restart in Japan, he said.

So far the North American plants have been using parts in their inventory or relying on those that were shipped before the earthquake, Goss noted. But those supplies are running low.

"We're going to get to a point this month where that gap in the pipeline starts to show up. So we'll have to suspend production for a while," he said.

A March 11 earthquake and tsunami damaged auto parts plants in Northeastern Japan, causing shortages that idled most of the nation's car production. Japan's daily auto output has fallen by more than 500,000 vehicles since the disaster, says Scotiabank Senior Economist Carlos Gomes. Some manufacturers are bringing plants back on line, but only at low speeds due to a lack of parts.

Shortages of parts from Japan are also affecting manufacturers outside the country. Just last week, Ford Motor Co. and Nissan Motor Co. said that several North American plants would be closed for part of this month, and Chrysler CEO Sergio Marchionne has said his company will see disruptions.

Toyota only gets about 15 percent of its parts from Japan for cars and trucks built in North America, "but still you have to have them all to build the vehicles," Goss said.

Goss spoke Monday ahead of an appearance in Louisville, Kentucky, by Toyota's head of North American operations. Toyota has about 500 companies supplying parts in North America, but many of them get components from Japan that might not be available, he said. During the shutdowns, workers will focus on training and reviewing operations for ways to improve. They also can take vacation or time off without pay.

The shutdowns will affect all Toyota and Lexus models made in North America, he said. Already several large dealership chains are predicting shortages of models from Japanese automakers in the spring and summer.

Goss wouldn't estimate how long the assembly lines would be shut down. "It depends on how fast we can help get those suppliers up and running again in Japan," he said. "Things change every day and we're trying hard to minimize any disruption to our production in North America."

Toyota is running short of multiple parts, mainly electronics and paint pigments, said Yoshimi Inaba, chief operating officer for North American operations. The company is looking for alternate parts suppliers. He also said it's too early to predict the impact on Toyota's sales and its effort to rebound from a string of safety recalls last year that have hurt sales.

"We have some inventory. So if the disruption on the production is short enough, then it wouldn't have any major impact," he told reporters after appearing at a literacy event in Louisville. "It is too early to predict how big the impact is."

Toyota last month warned that production cuts were possible at some North American factories, but said it didn't know when or for how long.