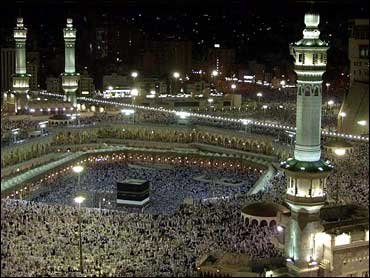 Those arrested Sunday had reportedly escaped an overnight raid by Saudi authorities on a bomb-filled, booby-trapped apartment in Mecca that killed five al Qaeda suspects linked to last month's suicide bombings in Riyadh.

The six reported arrests were in addition to least five suspects the Interior Ministry said were detained in Saturday's raid.

Mecca, located some 450 miles west of Riyadh, is the birthplace of Islam's seventh-century prophet Muhammad, the heart of the annual pilgrimage every able-bodied Muslim must perform at least once in a lifetime, and considered so holy it is off-limits to non-Muslims.

The legitimacy of Saudi rulers rests in part on their custodianship of the holy city, and a strike on it by Muslim extremists would be profoundly symbolic.

The Saudi newspaper Okaz reported Monday that suspects who escaped Saturday's raid fled in a car that broke down on the outskirts of Mecca Sunday afternoon. The men continued on foot and four were arrested at a mosque complex just outside of Mecca Sunday evening.

A fifth made it to the mountains surrounding Mecca where he was cornered, threatening to detonate a bomb. After a three-hour standoff, the suspect was overpowered and arrested and his bomb did not go off, the paper said. The paper did not give details on the arrest of the sixth suspect.

The Interior Ministry had no immediate comment on the reports Monday.

Sunday, the Interior Ministry released a statement on the Mecca apartment raid, saying police and other security agents clashed with a "group of terrorists…(who) were preparing an imminent terrorist act." No details of the alleged plot were given.

Five suspected militants died in the gunbattle initiated by the "terrorists" in the apartment near Mecca's main mosque, the statement said without giving their nationalities. Two security agents were killed and five security men and four civilians from the neighborhood were slightly injured.

The ministry said the apartment was booby-trapped and ready to explode. Some 72 bombs of different sizes were found with numerous other weapons, including semiautomatic rifles, knifes, communication devices, bomb-making materials and masks.

One security official, speaking on condition of anonymity, told The Associated Press that he believed the suspects who clashed with security agents at the apartment were "members of al Qaeda cells" because of similarities between weapons they used and how they "immediately shot at the police when cornered."

Al Qaeda is blamed for the Sept. 11, 2001, attacks and has denounced both the United States and the Saudi royal family.

The Saudi security official also believed those killed and arrested in Mecca Saturday were connected to the May 12 suicide bombings on Western residential compounds in the Riyadh that killed 35 people, including nine Americans and nine Saudi attackers.

The official said the suspects were planning to carry out attacks in Mecca, according to information gathered during interrogations Sunday. He did not identify any intended targets.

Saudi authorities have cracked down on suspected militants since the May 12 bombings, which were seen as attacks not just against foreigners but also the ruling Saudi royal family for its close ties to the United States.

The May 12 bombing, along with an attack in Casablanca, Morocco later the same week, contributed to a decision to raise the United States' terror alert level from "elevated" to "high" last month. It has since been returned to "elevated."

Since the Sept. 11 terrorist attacks in the United States, Saudi Arabia has been under pressure to clamp down on extremism within its borders. Fifteen of the 19 hijackers who flew planes into the World Trade Center, the Pentagon and a field in Pennsylvania were from Saudi Arabia.

In order to alleviate pressure on the Saudi royal family, U.S. forces recently moved a major air operations command center to Qatar as part of a removal of U.S. personnel from Saudi Arabia, where the presence of American forces irritates many Muslims.

Osama bin Laden, the Saudi-born exile who leads al Qaeda, was angered when Saudi Arabia, threatened by Iraq during the 1991 Gulf War, accepted the presence of U.S. troops he saw as "infidels."