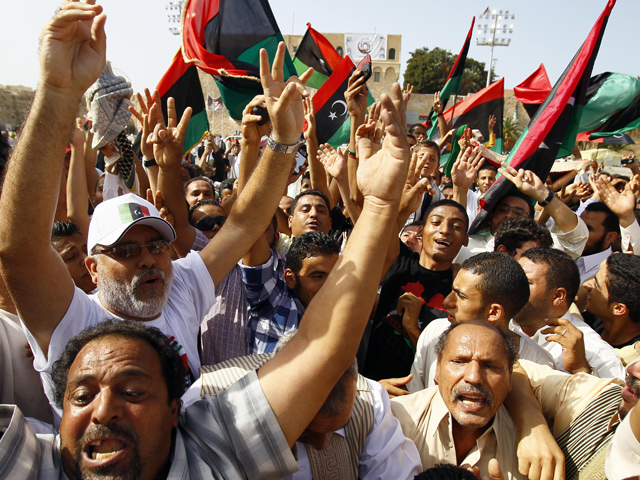 Muammar Qaddafi's blood-streaked bodywas on display in a commercial freezer at a shopping center in Misrata Friday, and the conflicting reports of how he died mirror the confusion in Libya as a disorganized leadership and divided people try to forge ahead.

The ruling National Transitional Council said it would declare the country's liberation on Sunday, the starting point for a timetable that calls for a new interim government within a month and elections within eight months.

In Misrata, residents crowded into long lines to get a chance to view the body of Qaddafi, which was laid out on a mattress on the floor of an emptied-out vegetable and onions freezer at a local shopping center.

The body had apparently been stowed in the freezer in an attempt to keep it out of the public eye, but once the location was known, that intention was swept away in the overwhelming desire of residents to see the man they so deeply despised.

The bloody siege of Misrata over the summer instilled a particularly virulent hatred of Qaddafi there — a hatred now mixed with pride because he was captured and killed by fighters from the city.

Men, women and children filed in to take their picture with the body. The site's guards had even organized separate visiting hours for families and single men.

"We want to see the dog," some chanted.

In Tripoli, joy over Qaddafi's end spilled into a second day as thousands converged on central Martyrs' Square for Friday prayers and celebrations. Men danced and hoisted the country's new red-green-and-black flag.

"It's the start of a new era that everybody hopes will bring security and freedom," said Tarek Othman, a computer specialist. "I hope democracy is the path we take so all of these Libyans who have sacrificed will really feel free."

CBS News correspondent Elizabeth Palmer interviewed people about the nature of Qaddafi's death in Tripoli's central square during the celebration.

"So you don't care if he was executed?" she asked one man, who responded: "No, he deserved to die."

"It was a perfect way," said a young girl.

Khaled Almslaty, a clothing vendor, said he wished Qaddafi had been captured alive.

"But I believe he got what he deserved because if we prosecuted him for the smallest of his crimes, he would be punished by death," he said.

He added, "Now we hope the NTC will accelerate the formation of a new government and ... won't waste time on irrelevant conflicts and competing for authority and positions."

It's a tall order after nearly 42 years of rule by one man, who often acted according to whims and tolerated no dissent. Libya's new leaders have stressed the need for reconciliation, but many factions are eager to have their say after years of repression.

The regime may be gone, said Gene Cretz, the U.S. ambassador to Libya, but it has left a toxic legacy.

"We are aware there were a lot of different rifts," Cretz told CBS News, "many of them created by Qaddafi over his 42 years. He became the master of divide-and-conquer in the last 42 years, so there is no doubt that the NTC is inheriting a very, very fractured, political body."

The Western-backed NTC, a collection of former rebels, returned exiles, technocrats and Islamists, has always been united behind its goal of ousting Qaddafi. Now the group must overcome divisions and competing self-interests to rebuild the oil-rich North African nation, which was stripped of institutions under Qaddafi.

And as CBS' Palmer noted: "[The politicians have] been honing the art of democratic speech-making. But not one of them has ever held elected office or run a government based on the rule of law."

"Democracy as we know is a messy process," added Cretz, "so they are going to have learn how to deal with coalition building, and how to deal with different interest groups as they bring people together now."

The NTC said interim leader Mustafa Abdul-Jalil will formally declare liberation on Sunday in the eastern city of Benghazi, where the revolution began in mid-February. Even that event has been the subject of confusing -- first scheduled for Friday, then pushed back to Saturday, then Sunday. Prime Minister Mahmoud Jibril has promised to resign, saying he will not be part of any new government and will instead turn his attention to fighting corruption.

The Transitional National Council has asked the United Nations to "play a significant role" in helping them write a constitution, hold elections and build democratic institutions, said Ian Martin, the U.N. envoy to Libya.

"No one should underestimate in this moment of celebration in Libya how great are the challenges that lie ahead," he said. He also warned of "a major challenge in the future of those of the fighters who don't wish to return to previous civilian occupations."