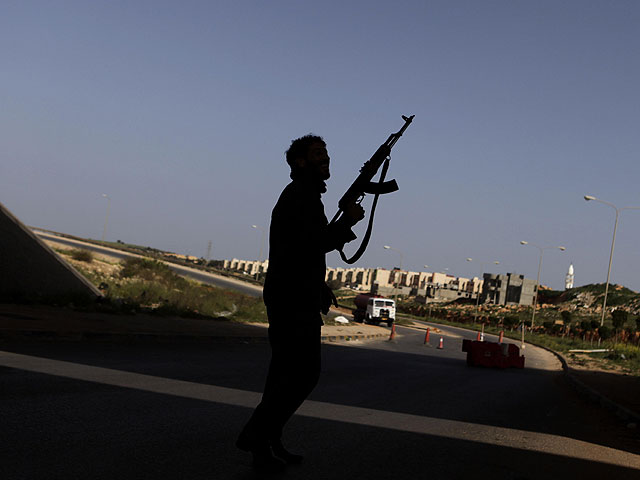 Libya's rebel forces continued to struggle against Muammar Qaddafi's superior firepower on the ground, as the United States and other allies consider whether to supply them with weapons.

The rebels have given up nearly all the ground they have gained after allied airstrikes took out some of Qaddafi's heavy weapons. Now government forces are changing tactics, leaving behind the armed military vehicles and moving in armed pickup trucks like the opposition does, reports CBS News correspondent Mandy Clark. That makes it difficult for coalition forces overhead to distinguish who's who on the ground.

Faced with a series of setbacks after recent gains, the rebels now are starting to show their combat fatigue, reports Clark. Outgunned and often outflanked in the field, they lack any sort of military strategy or leadership. They are eager to take ground, but are quick to flee when they face any real fighting. The reality is that a rebel military victory seems increasingly unlikely.

NATO takes over in Libya, says no on arms

On Thursday, the rebels came under heavy shelling by Qaddafi's forces in the strategic oil town of Brega on the coastal road that leads to Tripoli. Black smoke billowed in the air over Brega as mortars exploded.

"Qaddafi's forces advanced to about 30 kilometers east of Brega," said rebel fighter Fathi Muktar, 41. Overnight, he said the rebels had temporarily pushed them back, but by morning they were at the gates of Brega. "There were loads of wounded at the front lines this morning," he said of rebel casualties.

The rebel struggles are hardening the U.S. view that the poorly equipped forces are probably incapable of prevailing without decisive Western intervention, a senior U.S. intelligence official told The Associated Press. On Wednesday, officials revealed that the U.S. has authorized covert assistance for the rebels, but it's not clear in what form that help will come.

"I think they have two missions. One is the continued assessment of what the rebel force looks like, who their leaders are, what's their makeup," retired Major Gen. James Marks, who served as the senior intelligence officer for U.S. ground forces at the beginning of the war in Iraq, told "The Early Show" Thursday. " And the second mission, I am absolutely convinced, that they are placing targets and helping rebel forces identify friend from foe on the ground and then illuminating targets for the overhead NATO forces."

Rebels say that what they really need are arms. The U.S. and Britain believe that existing U.N. Security Council resolutions on Libya could allow for foreign governments to arm the rebels, despite an arms embargo being in place.

However, NATO Secretary-General Fogh Rasmussen doesn't support that stance, saying that he had "taken note of the ongoing discussions in a number of countries but as far as NATO is concerned ... we will focus on the enforcement of the arms embargo."

Even though the U.S. believes in the legality of arming the rebels, the White House still has made no decision on whether to pursue that course of action.

There is also the question of who they would be arming. Although Secretary of State Clinton has met the rebel leaders, U.S. intelligence is still trying to determine what lurks behind the public face, reports Martin. Just this week, Admiral James Stavridis, NATO supreme commander for Europe, told Congress that "we have seen flickers in the intelligence of potential al Qaeda, Hezbollah."

Testifying before Congress Thursday, Defense Secretary Robert Gates told Congress that the U.S. doesn't have "a lot of visibility into [the] opposition" and described them as "disparate [and] scattered" with each element likely pursuing its own agenda.

Even with the uncertainty surrounding the rebel movement's prospect for success, the Qaddafi regime has also suffered key setbacks. Britain's government said Wednesday that Foreign Minister Moussa Koussa had arrived in Britain and was resigning from his post, though the Libyan government denied it. British Foreign Secretary William Hague said the resignation showed the regime is "fragmented, under pressure and crumbling."

Koussa is not the first high-ranking member of the regime to quit -- the justice and interior ministers resigned early in the conflict and joined the rebellion based in the east. However Koussa is a close confidant of Qaddafi's privy to all the inner workings of the regime. His departure could open the door for some hard intelligence on the regime.

Koussa, before assuming the post of foreign minister, served for over a decade as Libya's foreign intelligence chief and is seen as one of Qaddafi's inner cadre.

Britain refused to offer him immunity from prosecution.