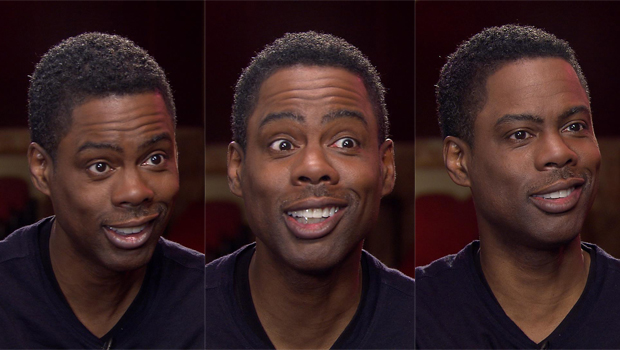 Chris Rock first made his mark in a really big way on the stage of "Saturday Night Live" back in the 1990s. This morning he's on the stage of Harlem's Apollo Theater with our Mo Rocca for some Questions-and-Answers:

At 49 -- but looking 35 -- Chris Rock is recognized as one of our greatest stand-up comedians.

He's also been in a lot of movies, though he describes his movie career up until now as "middling."


As an actor, Rock hasn't always been recognized: "I am the zebra in 'Madagascar.' It's the biggest thing I've ever done. People are, 'Oh, you're this famous comedian.' No, I am the zebra, I am Marty.'"

Rocca retorted, "That's ridiculous. Most people do not think that."

"'Madagascar 3' made more money than every movie I've ever done combined," Rock replied.

But he said that maybe his latest, "Top Five," "will get me out of Marty's shadow."

"Top Five," which Rock wrote and directed, is his most personal film yet. Rock plays Andre Allen, a former stand-up comic who just wants some respect.

Rock packed his movie with some of today's best black comedic actors, among them Tracy Morgan and Sherri Shepherd.

"Not a lot of comics are generous about allowing other funny people in a scene," said Rocca. "You just loaded it up."

But when Rock does stand-up, it's Rock and Rock alone.

He said his paternal grandfather was a great influence on him: "Yeah, my grandfather, my dad's father was a preacher. And I used to spend a lot of time with him. I would watch him write his sermons. I pretty much do what he did. He'd write the topics. And then he'd riff on the topics. And I kind of do comedy like he preached."

"Is there also, like, another relationship?" Rocca asked. "Because when you're delivering a sermon, you are trying to get at a truth."

"You are trying to get at a truth. I mean, I watch reverends as much as I watch comedians. I watch T.D. Jakes every Sunday. I watch Joel Osteen every Sunday. 'Cause they're really good performers. And they're doing exactly the same thing I'm doing. They're just going for a different thing.

And just like a preacher, Rock's subject matter can be heavy. His comedy isn't about nothing.

Even hen he's not cursing, he's uncensored. When Rock hosted the Oscars in 2005, the Academy was not amused.

"Oscars are almost a religion," Rock said. "That what I learned when I hosted the Oscars. I would say things like, 'Hey, it's art. You can't really judge art -- you know, what's better, Picasso or Rembrandt, you know what I mean?' They don't wanna hear that. Like, 'Yo, it's the Oscars! There are winners and losers. We judge art here, okay?'"

Would he do it again if they asked? "I would love to host the Oscars again," Rock said.


"Some comics like Kathy Griffin have a no-apology policy," said Rocca. "She just will not apologize for a joke."

"It's not that I have a no-apology policy. I understand people getting mad, especially when you talk about them. I did some joke about Janet Jackson whipping out your breast at the Super Bowl."

"She didn't 'whip it out,'" laughed Rocca. "I think Justin Timberlake unleashed it, but anyway --"

"Anyway, there was a breast at the Super Bowl! And, you know, every now and then I bump into her and she just wants to strangle me. I can't believe Penny from 'Good Times' hates me, you know? Charlene from 'Diff'rent Strokes' is mad at me. Am I gonna apologize to Janet? I wouldn't, no. On some level I'm sorry, but on the other level it's literally my job. Like, you whipped out your breast at the Super Bowl. This is what I do!

"I get shade like you would not believe. Like, wow! If I can apologize to the Jacksons I would. I've done way too much stuff about the Jacksons. If I walk in a room with the Jacksons, I'm going to be so beat up. They're old black men from Gary, Indiana!"

Rock, who grew up in Brooklyn's Bed-Stuy neighborhood, now lives in Alpine, New Jersey, a tony suburb of New York City, with his wife, Malaak, and their two daughters.

Rocca asked, "Does it make it harder to be funny when you have more money?"

"It's not that it's harder to be funny when you have more money; it's harder to leave your house and work on it, and you gotta go to some club," he said.


"And you still have to go there really to work on this."

Still, Chris Rock isn't about to retire. There's one other job he has thought about: "I would love to work at '60 Minutes,'" he laughed. "That's, like, the only job I would consider taking."

"If you did a story for '60 Minutes' and you could interview anyone, who would you want to interview?"

"I would go to Ferguson right now and I would just interview white people," Rock said. " 'Cause whenever they do stories on race, they always interview black people. Well, we know what black people feel about race. I would love to just interview white cops. The question isn't why they shoot so many black kids, which is horrible. The real question is, like, 'How come you never shoot white kids?' That's the question."

"Do you think that people are too careful when they talk about race?" Rocca asked.

"It's not that I think that people are too careful when they talk about race. I think people in general are just too quick to call things racist. Sometimes people say things that are racist that are just out of not knowing any better. And once they know better they're like, 'Oh, I'm sorry. I didn't know that offended you like that.'"


"You think that sometimes behavior like that is branded as racist?"

"Racist or homophobic or, you know, anti-Semitic or whatever. Just people not knowing. And of course that bottles 'em up or makes them actually become racist!" he laughed. " 'Cause they get, 'Hey, I was just askin' a question and I got beat up by all these people!'"

Chris Rock has never had a hard time speaking his mind -- and the response has been well worth it.

What's the best feeling you can give somebody? You can have sex with them, or you can make them laugh," he said. "And pretty much you get both when you marry a person, for the most part. People stop talking to people they have sex with, people shun them for life!

"People never get rid of people that make them laugh."


To watch a trailer for Chris Rock's "Top Five," click on the video player below.