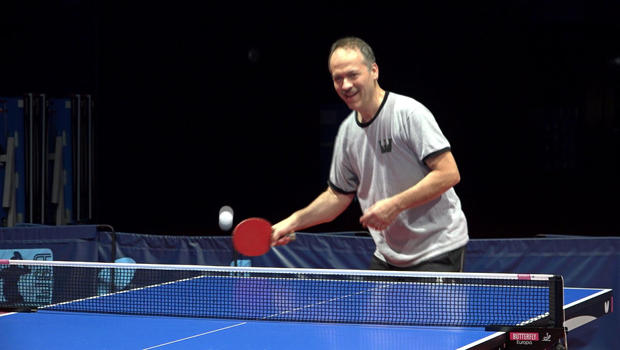 Wednesday marked the 75th anniversary of The New York Times crossword puzzle, a puzzle, we might point out, that’s featured all three anchors of “Sunday Morning” (myself included) as clues. As for the man who has edited the puzzle since 1993, he has the distinction of being a master of wordplay -- and, as Barry Petersen now reveals, master of a very different sort of game:

Will Shortz’s passion is crossword puzzles, and he’s world class -- editing the daily puzzle in The New York Times, and authoring or editing more than 500 crossword puzzle books.

“Solving a crossword is like putting the world in order,” Shortz said. “And you don’t get that satisfaction much in everyday life.”

His success has him constantly in demand, traveling the world as the renowned “Puzzle Master.” That should be enough to fill every hour of his every day. But he has another passion. Shortz might describe it as two words, eight letters.

“When I’m walking into a club and I hear the sound of ping pong balls, that is one of my favorite sounds in the world,” he said.

He started playing as a kid in the family basement, and by high school he was getting good, with the trophies to prove it. He won his first ping pong prize in 1966, at age 14.

But that same year the teen-aged Shortz sold his first crossword puzzle, and a career was launched.

It would be three decades later, in 2001, when Shortz rediscovered his love of the game. Playing a few games a week evolved into an everyday habit. Then, in 2011 he opened the Westchester Table Tennis Center in the New York City suburb of Pleasantville, N.Y., where he lives.

On most nights, there is a neverending diversity of ages and talents, and one shared love.

“When you’re in a match,” Shortz said, “you’re looking at your opponent’s weaknesses, and considering your own, and trying to maximize your game against the other person.”

“So there’s an intellectual challenge to this?” Petersen said. “We just think ping pong is getting the ball back to the other person.”

Today, at age 64, Shortz is ranked in the top 25 percent of table tennis players over age 60 in the country.

Not as good as Kai Zhang, who is among America’s top 25 players. Kai’s family wanted him to become an American citizen to train and compete here. When no other host family would take him in, Shortz did, as guardian and mentor. Who better to help in Kai’s dream to someday compete in the Olympics?

And while Kai chases his dream, Will Shortz has a dream of his own: He wants to set a record for the longest consecutive number of days playing table tennis. Call it a challenge; call it an obsession. To date, Shortz has played in more than 250 table tennis clubs around the world.

“The smallest club I’ve ever played at was in Goa, India,” he said. “They had one table. It was actually a pretty good facility, but there was no air conditioning and it was in the summer, so I was just dripping wet after a few minutes.”

He is so intent on achieving his goal that a few years ago Shortz began meticulously planning his travels, mapping out available clubs, even bringing along his own playing partner to make sure he always has an opponent.

It was on a trip to Eastern Europe last October where Petersen caught up with Shortz playing in Schwechat, Austria.

Which meant he had played ping pong every day for more than four years.

Then, it was on to Senec in Slovakia, where he presided over the opening ceremony of a Sudoku competition for the World Puzzle Federation, an organization he co-founded.

The next day, to Vienna, and one of the oldest table tennis clubs in Europe. Then, across the border to Bratislava, and a chance at setting yet another personal record. Shortz wanted to play in two countries on the same day. He’d located three clubs, but number one was closed, and number two looked out of business. There was still number three, but his challenge looked doomed because every table was reserved.

“So it didn’t look like I could play, but I came in anyway and there were five guys who had reserved three tables, they needed one more person to play, so I lucked out!”

Back home, you can always find him back at his club.

“There is a lot of that!” Shortz said.

“Why is this as relaxing as doing a puzzle?

“Great question. The reason this is so relaxing, just like crosswords, is that you get completely wrapped up in the game. You forget everything else in the world. And when you’re done, you’re relaxed. You’re refreshed. You’re ready to go back to do everything else.”

This Sunday morning makes it 1,600 days, and counting, a streak so unique he will one day submit it as a brand-new category worthy of a Guinness World Record.